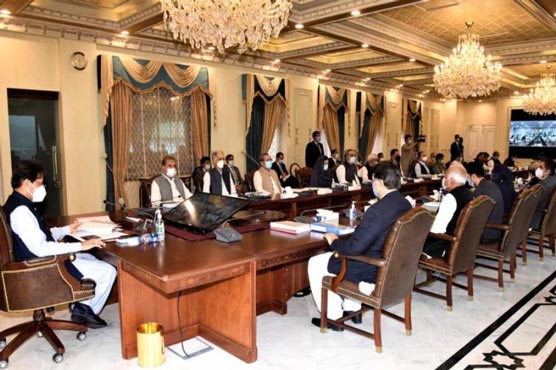 The ban on Tehreek-e-Labbaik was imposed on request of Punjab Government.

ISLAMABAD (Dunya News) – Federal Cabinet on Thursday approved a summary from Interior Ministry seeking a ban on the Tehreek-e-Labaik Pakistan (TLP) under the anti-terrorism law.

Prime Minister Imran Khan has already given approval to the summary regarding ban of TLP after days of violence across the country in which at least two policemen lost their lives.

Later, speaking exclusively in Dunya News program “Dunya Kamran Khan Kay Sath”, Interior Minister Sheikh Rasheed said that everyone is on board on the issue of banning TLP. The decision was made with forethought because these people do not want to backtrack from the politics of sit-in.

Seven cases have been lodged in Islamabad against the leaders and workers of Tehreek-e-Labbaik Pakistan (TLP) and teams have been formed for arrests.

All seven cases have been filed on the complaints of police officials. Sections of attack on police personnel, interference in government affairs and terrorism are included in the cases.