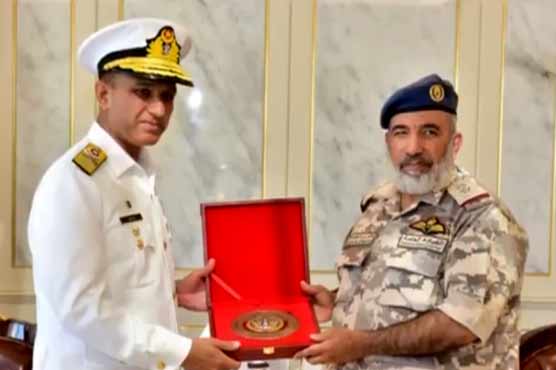 ISLAMABAD (Dunya News) – Chief of the Naval Staff Admiral Muhammad Amjad Khan Niazi on Tuesday called on military heads of the armed forces of Qatar and visited its naval facilities during his official visit.

Upon arrival at Doha Naval Base, the Naval Chief was received by Commander QENF and a ceremonial Guard of Honour was presented to the Admiral. The Naval Chief visited various Qatari Naval facilities.

Commander QENF appreciated Pakistan Navy’s initiatives in support of collaborative maritime security in the region and acknowledged significance of strong bilateral naval collaboration. A comprehensive brief was also given to the Naval Chief on the capabilities of Qatari Naval Forces at the occasion.

The Naval Chief underscored the importance of enhancing interactions between the armed forces of both countries through exercises and training exchange programmes. The dignitaries, while acknowledging the significance of strong bilateral military cooperation in diverse realms, stressed on enhancing collaborations in expanded military domains.

It was expected that visit of the Naval Chief would further augment and expand defence ties between the two countries in general and navies in particular.