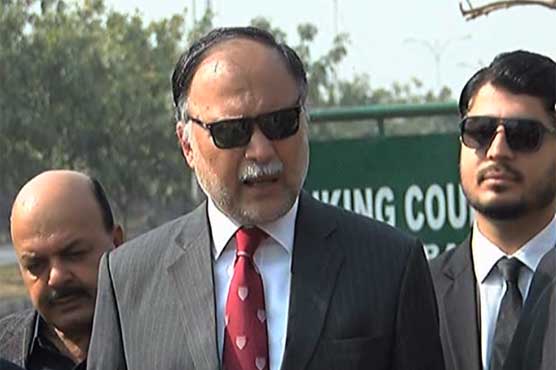 Ahsan Iqbal said that stealing of votes is a bigger crime than a murder.

Talking to media persons, he said that code of conduct was openly violated during the Daska by election and Punjab government failed to explain disappearance of 20 presiding officers.

Ahsan Iqbal said that stealing votes is a bigger crime than a murder and expressed hope that Election Commission of Pakistan (ECP) while making this election a test case, will pass exemplary punishment to the staff involved in the rigging.

He further said that election were held in a normal manner in Sindh, Khyber Pakhtunkhwa and Balochistan but the way polls was held in Daska, does not even happen in Uganda and Africa.

Former Railways Minister Saad Rafique lashed out at policies of PTI and said that government’s only job is to target political opponents.

Earlier, Shahid Khaqan Abbasi on Tuesday accused incumbent government of involvement in election theft and said that everyone including lawmakers are sick of ruling party.

Talking to media persons outside Election Commission of Pakistan (ECP), he said that by-elections in NA-75 were stolen by the government as the ECP itself said that election of the constituency were rigged.

Former prime minister Shahid Khaqan Abbasi said that now government is trying to hide its face after the plan of rigging was exposed. He also demanded that hearing in ECP should be held publically.

The PML-N leader further said that parliament is now paralyzed while anti-graft watchdog itself is involved in corruption. Judicial system is now a joke as lawyers are boycotting courts in Islamabad for more than a week and cases 10 federal ministers and 3 former prime ministers are being heard.