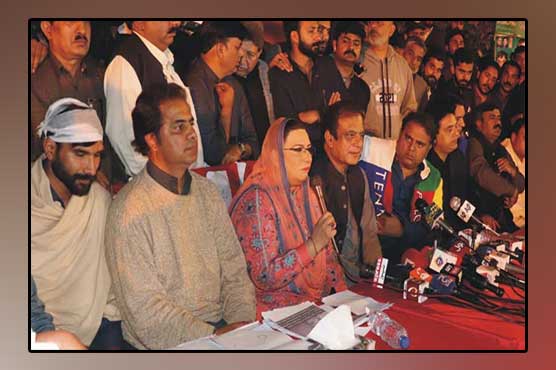 DASKA (Dunya News) - Minister for Information and Broadcasting Syed Shibli Faraz has said that Pakistan Tehreek-e-Insaf (PTI) won the by-election in Daska with a clear majority.

Senator Shibli Faraz asked the Election Commission of Pakistan (ECP) to notify the victory of PTI candidate Ali Asjad Malhi in NA 75 by election as people of Daska have mandated the ruling party candidate during election.

He said PML-N leadership has gone wild and frustrated as the anti-state narrative of Muhammad Nawaz Sharif is gradually losing support due to the mass acceptance of Prime Minister Imran Khan.

Shibli Faraz said the PML-N was badly scared from the narrative of Prime Minister Iman Khan, who wanted to bring transparency in elections by ending rigging in the elections and politics of intimidation. In some constituencies their politics has already met fag end of the day.

He said the PML-N was in the habit of doing politics of intimidation, hooliganism and money and they repeated their practice by sending vandalism specialists Rana Sanaullah, Javed Latif and others to pollute the atmosphere of electioneering.

The leadership of PML-N was shedding crocodile tears which had refreshed the memories of Model Town massacre in which innocent women and children were brutally killed sans any remorse, he said.

He said that assassination of workers on the polling day was under the patronage of Rana Sanaullah, the man responsible for Model Town killings.

PML-N leaders during their election campaign in Daska used to say that they would win the elections with the power of gun, the minister added.

He said due to mass acceptance of Prime Minister Imran Khan’s narrative, the PTI had got more votes in Daska and Wazirabad constituencies in recent by elections as compared to 2018.

Castigating the opposition, he said they had already been exposed owing to hypocrisy shown in their non-interest in making the Senate elections transparent and stopping vote buying or purchasing.

In the past Senate elections, the opposition parties had indulged in vote buying and purchasing to bring elite class in the upper house of the parliament.

He said the government was working hard to introduce electronic voting system to ensure transparency. Legislation was being enacted to give right to vote to expatriate Pakistanis, he added.

He thanked the people of Daska for reposing confidence over Pakistan Tehreek-e-Insaf (PTI) in the by elections.

He said he had come to Daska to condole over the assassination of party workers and sympathize with the bereaved families.

Ali Asjad Malhi, the candidate of NA 75 Daska strongly denied the allegations of enduring defeat in his own village, saying his family had never lost the elections from his village since 1947. In the last day’s elections, he won the elections with the lead of 1,000 votes.

Condemning the celebrations of PML-N despite assassination of political workers, he said PTI did not celebrate the win due to killings.

Chaudhry Fawad Hussain demanded of the Election Commission of Pakistan to notify success of PTI candidate in the by polls. He said PTI is striving for free, fair and transparent elections by ending the politics of horse-trading and sale and purchase of votes. He, however, said that his party will accept ECP s decision.

Special Assistant to the Punjab Chief Minister on Information Dr. Firdous Ashiq Awan said rule of law will prevail in the murder case and culprits will get the punishment according to law after completion of inquiry.

The ministers, along with PTI leaders Firdous Ashiq Awan, Usman Dar, Ali Asjad Mallhi, and others also visited family of the deceased PTI worker and offered fateha for the departed soul.

They also prayed for the early recovery of the injured in the incident.