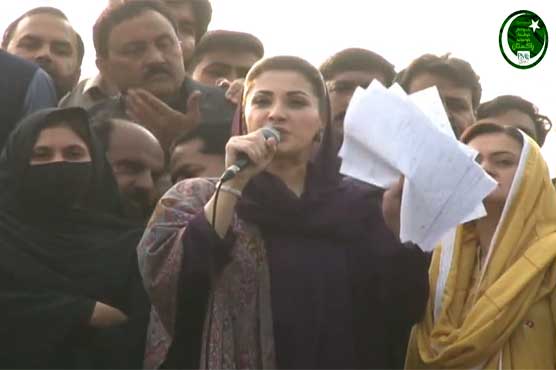 The PML-N vice president said that the army of spokespersons used the fog as an excuse, adding that some presiding officers are absent for over 14 hours.

Maryam Nawaz said that the people of Daska defeated those who tried steal votes, adding that they had an eye on Daska. “We have defeated them [govt] in their stronghold in Nowshera,” Maryam added.

She said that people of Daska fought for the democracy despite rigging in the elections and rejected sugar, gas and flour thieves.

Talking about alleged disappearance of presiding officers some polling stations, the PML-N leader said “They talk about fog, was fog only in these 23 areas?"

Maryam Nawaz said that the entire nation now knows how the PTI government came to power. "I want to thank the PM for showing his reality to the public."

She said that the chaos in Daska has proven that Imran Khan rigged the 2018 General Elections.

"If we knew PTI will resort to killing people for votes, we would have given our seats to them."

She added that after this incident, people across Pakistan have rejected the PM and his government.

PML-N has accused the ruling PTI of attempting to rig the by-polls in Sialkot’s NA-75 after which the results were withheld by the ECP.

On the other hand, the Election Commission of Pakistan has directed the returning officer of Daska to conduct a complete inquiry over the issue of NA-75 by-poll election results.

The Returning Officer expressed doubts over the results of 20 polling stations in the preliminary report. He also expressed reservations over the role of police and administration in the initial report, said sources.