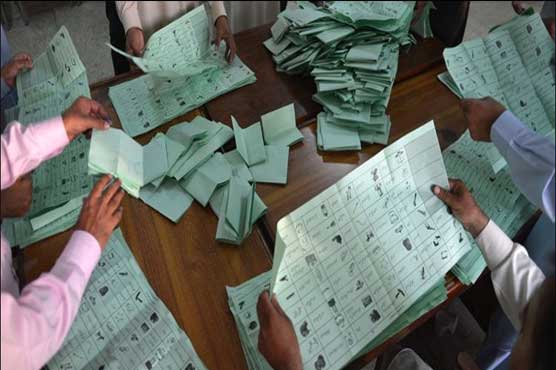 Voting started at 8:00am and continued till 5:00pm without any interval.

ISLAMABAD (Dunya News) - The counting of votes in all four constituencies of Punjab and Khyber Pakhtunkhwa is currently underway with some unconfirmed and unofficial results also being reported. PML-N has taken a decisive lead in PK-63 Nowshera while it also leads in PP-51 Wazirabad. On the other hand, PTI is currently in the lead in NA-45 Kurram and NA-75 Daska.

According to the preliminary results of PP-51 constituency of Wazirabad, PML-N candidate Begum Talat Shaukat is leading with over 44,000 votes while PTI candidate Chaudhry Muhammad Yousuf is trailing with over 38,000 votes.

According to the preliminary results of PK-63 constituency of Nowshera, PML-N’s Ikhtiar Wali has won the by-election with 21,122 votes while PTI’s Mian Umar was able to secure 17,023 votes.

According to the unofficial results of 113 polling stations of NA-45 Kurram, PTI candidate Malik Fakhr Zaman is in front with 11,430 votes while Independent candidate Syed Jamal trails with 10,360 votes. JUI-F’s Candidate Malik Jamil Khan is at the third position with 6,311 votes.

According to unofficial results of 134 polling stations of NA-75 Daska by-election, Ali Asjad of PTI is leading with 45,226 votes while Noshin Iftikhar of PML-N is in second with 36,744 votes.

Earlier, voting started at 8:00am and continued till 5:00pm without any interval.

Rangers and FC officials were deployed outside the polling stations and given the authority to take action against any irregularities or violations. However, they were required to notify the relevant presiding officers before taking said action.