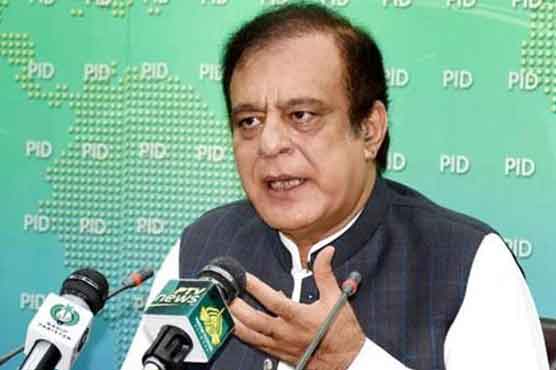 ISLAMABAD (Dunya News) - Minister for Information and Broadcasting Senator Shibli Faraz said instead of threatening the Election Commission, Bilawal should submit reply regarding his own party’s foreign funding.

Giving his reaction to the press conference of the Pakistan People’s Party (PPP) Chairman, Shibli Faraz said Bilawal should not shift the blame for his own inefficiency and incompetence on others, adding politics of Bilawal Bhutto Zardari was based on lies, deceit and corruption.

The minister said only 110 million cubic feet gas went out of Sindh. He said that those who always talked about rights of poor and workers did not spare even the pensioners.

Shibli Faraz said a fraud of Rs 2.25 billion had been unearthed in the Pensioners Fund in the Finance Department under Sindh Chief Minister.

He said fake pensioners and fake accounts were created and 95 percent of the fake bank accounts had been traced in the home district of Chief Minister, Dadu.

He said that the nation had not forgotten that Sindh government created a shortage of wheat by not releasing it and forced people of Sindh to purchase expensive flour.

Regarding the development work on Bundal Island, Shibli opined that it would be a gift from the federation to people of Sindh.
He said when politics was based on inheritance rather than merit, the outcome was what had happened to the Pakistan Democratic Movement (PDM) now.

The PDM movement had fizzled out as it was started for the defense of personal interests. Now it has been confined to the squares, alleys and narrow and dark intersections, rather than the big grounds and main highways.