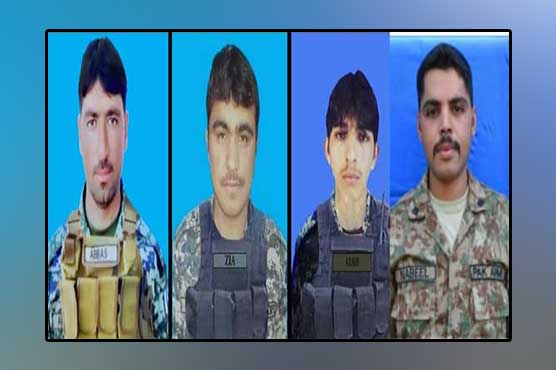 According to ISPR, clashes occurred along the Line of Control and in North Waziristan.

RAWALPINDI (Dunya News) - A Sepoy of Pakistan Army embraced martyrdom amid bravely fighting back Indian Forces’ unprovoked ceasefire violation in Dewa Sector along the Line of Control while three soldiers have been martyred in a clash with terrorists in North Waziristan.

The Indian troops had initiated unprovoked ceasefire violation along the LoC in Dewa Sector, the Inter Services Public Relations (ISPR) said in a brief press statement.

The Pakistan army troops had responded promptly and inflicted heavy losses to enemy in terms of men and material, it said.

On the other hand, 3 soldiers have been martyred in a clash with terrorists in North Waziristan.

The Security Forces on Thursday conducted two separate Intelligence Based Operations (IBOs) on terrorist hideous in North Waziristan where three soldiers embraced martyrdom and two terrorists were killed during the exchange of fire.

Earlier a senior Indian diplomat was summoned to the Ministry of Foreign Affairs on Tuesday to register Pakistan’s strong protest over ceasefire violations by the Indian occupation Forces along the Line of Control (LoC) on 11th January 2021, resulting in serious injuries to a 10 year old boy.

Due to indiscriminate and unprovoked firing by the Indian occupation forces in Nezapir Sectors of the LoC on 11th January 2021, 10 year old Muhammad Zaheer s/o Muhammad Rafique, residents of Mohri village had sustained serious injuries.

The Indian occupation forces along the LoC and the Working Boundary (WB) have been continuously targeting civilian populated areas with artillery fire, heavy-caliber mortars and automatic weapons. This year, India has committed 48 ceasefire violations, resulting in serious injuries to 3 innocent civilians.

These egregious violations of international law reflect consistent Indian attempts to escalate the situation along the LoC and are a threat to regional peace and security. It was added that by raising tensions along the LoC and the WB, India cannot divert attention from the grave human rights situation in the Indian Illegally Occupied Jammu & Kashmir (IIOJK).