Pakistanis react to nationwide blackout with tweets and humour 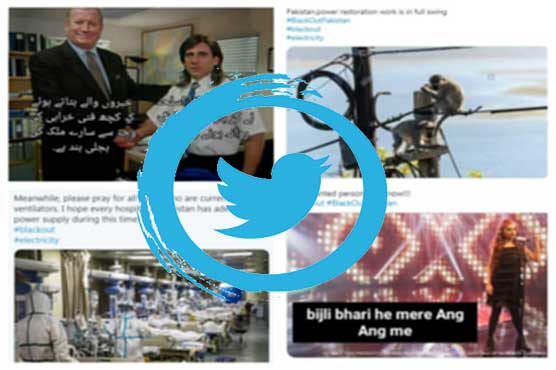 Pakistanis react to nationwide blackout with tweets and humour

Outage occurred shortly before midnight in Karachi, Rawalpindi, Lahore, Islamabad and other cities.

LAHORE (Dunya News) – Residents affected by a power outage in Pakistan, which left more than millions people across the country without electricity, have shared their experiences online.

According to reports, the outage occurred shortly before midnight in Karachi, Rawalpindi, Lahore, Islamabad, Multan, and others.

In a series of tweets, Pakistan’s Energy Minister Omar Ayub Khan said: “A fault has been created in Guddu at 11:41. The fault tripped in the country’s high transmission, causing the system’s frequency to drop from 50 to 0 in less than a second. Power plants have been shut down due to falling frequencies.”

While authorities in Pakistan were attempting to restore the power in the country, many residents have taken to Twitter to fight the boredom. #BlackOutPakistan began to trend on Twitter, with many sharing mixed reaction including hilarious memes and jokes using the hashtag.

Me: I Will Study Today
Le Blackout: #Blackout pic.twitter.com/mGXekjxdSc

When my phone doesn t turn off throughout the whole night:#blackout pic.twitter.com/nDB4ZRsUjQ

#blackout in whole Pakistan-__-
Pakistanis start making memes about it.

There is no #Blackout in Interior Sindh.
Because we didn’t gave Electricity yet! #blackout pic.twitter.com/KpCbqm8oDD

While some users were trending memes and poking fun at the power crisis in Pakistan, others also shared images of patients in Pakistani hospitals.

Meanwhile, please pray for all those who are currently on ventilators. I hope every hospital in Pakistan has adequate power supply during this time.#blackout#electricity pic.twitter.com/waFAlFwdBa

Pray for those who are on ventilators Ameen.#BlackoutPakistan #blackout pic.twitter.com/CDOAZzrn4P

On a serious note, as its a complete #Blackout in Pakistan, there are many patients including Covid ones in hospitals right now & some must be on Vent/ICU, mostly hospitals do run on Powerful Generators but not all of them continue, may ALLAH keep all patients safe & alive Aameen