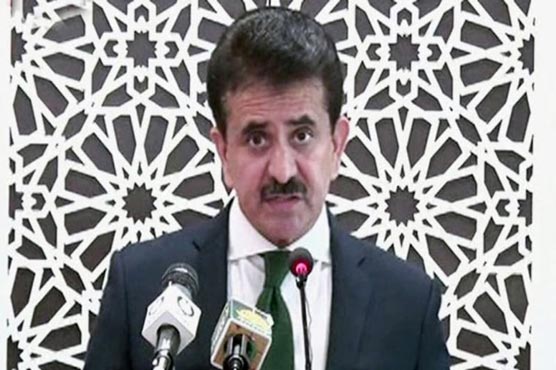 ISLAMABAD (Dunya News) - Pakistan has urged the international community to take a serious look into the malicious Indian propaganda that not only aims to defame Pakistan, but also politicizes international forums and imperils peace and security.

He said the imposition of a fine on Republic Bharat TV by the British media regulator Ofcom, on account of anti-Pakistan hate show by Arnab Goswami, is yet another manifestation of the BJP government s well-known smear campaign against Pakistan through state-controlled media.

He said the action taken by Ofcom, along with the report by EU DisinfoLab, corroborates our long-held position about India s incurable obsession with Pakistan.

Zahid Hafeez urged Indian government to eschew the use of false propaganda as an instrument of state policy. He said by now India must have realized that such ploys of spreading misinformation are doomed to fail.

Strongly condemning the unabated Indian state-terrorism and extra-judicial killings of innocent Kashmiris, the Spokesperson called upon the international community to take immediate cognizance of the aggravating situation in Indian Illegally Occupied Jammu and Kashmir.

He said that in attempts to divert world attention from its internal failings and grave human rights violations in IIOJ&K, India continues to escalate tensions along the Line of Control.

He said the international community must advise India against any irresponsible act and to desist from any action that would jeopardize regional peace and stability.

Zahid Hafeez said that despite our repeated calls, the Indian government has failed to provide a satisfactory response with regard to the death of 11 Pakistani Hindus under mysterious circumstance in Jodhpur, India on 9 August this year.

To a query, Zahid Hafeez Chaudhri said Indian military buildup under the BJP regime is threat to regional peace. He said Pakistani forces are fully ready to deal with any misadventure by Indian side.

To another question, he said recognition of Israel is not under consideration and all speculations in this regard are baseless.

He said for Pakistan recognition of Israel is impossible without the resolution of Palestine issue.

Answering a question, the spokesperson said Pakistan s relations with Russia remained an important priority for Pakistan s Foreign Policy. He said the two country have made important progress in the development of strong bilateral relations covering various important fields including economy and trade.