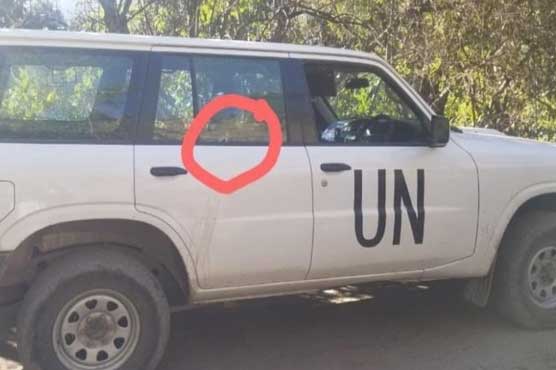 UNITED NATIONS (APP) - The United Nations Friday confirmed that a vehicle of the U.N. Military Observer Group in India and Pakistan (UNMOGIP) was hit by an “unidentified object” near Rawalakot on the Pakistani side of Line of Control (LoC) in the Indian Illegally Occupied Jammu and Kashmir (IIOJK) region, but the occupants were not injured.

“The Mission is currently investigating the incident,” Deputy Spokesman Farhan Haq said in response to a question from APP at the regular briefing in New York.

He said the incident occurred when UNMOGIP military observers were conducting routine monitoring activities near Rawalakot as part of the Mission’s mandate to observe and report on ceasefire violations at LOC in Jamm and Kashmir.

“UNMOGIP personnel and the driver were not harmed but the vehicle sustained some damage,” the spokesman said.

In Islamabad, the Foreign office said that Indian troops “specifically targeted” the UN vehicle carrying two UNMOGIP officers from across the Line of Control, in what was termed a “new low” in their conduct.

The UNMOGIP officers were on their way to Polas village to meet with the victims of Indian ceasefire violations when they came under fire, the foreign office said.

The officers were immediately evacuated by the Pakistan Army and brought back to the UNMOGIP field station in Rawalakot.

The incident happened as Foreign Minister Shah Mahmood Qureshi told a press conference in Abu Dhabi that he had credible information that India was planning a ‘surgical strike’ against Pakistan to divert attention from its internal affairs.