Pak army ready to give befitting response to any Indian aggression: FO 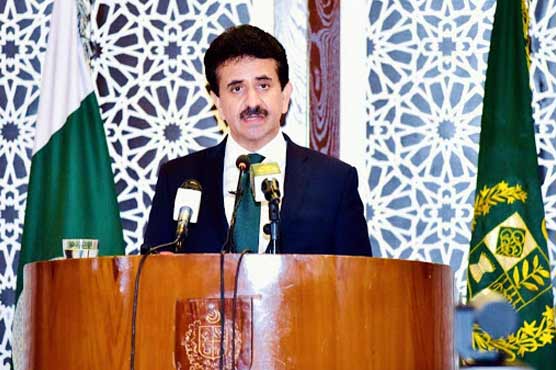 Pak army ready to give befitting response to any Indian aggression: FO

Pakistan calls on the international community to stop any Indian campaign against Pakistan.

Addressing weekly news briefing in Islamabad on Friday, he said that real Indian face has been exposed to the world, adding that New Delhi must assess the gravity of the situation on any misadventure. Pakistan calls on the international community to stop any Indian campaign against Pakistan.

Chaudhry said that Indian Army opened unprovoked fire on the Cherikot sector along the LoC and targeted the United Nations observers’ vehicle, however, fortunately, the people riding the vehicle were safe. “Pakistan reiterates its demand for India to abide by the 2003 ceasefire agreement,” he said.

The officers were on their way to Polas village to meet with the victims of the Indian Ceasefire Violations.The UN vehicle was damaged, however the officers remained safe.

The FO Spokesperson said the officers were immediately evacuated by Pakistan Army and brought back to the UNMOGIP field station in Rawalakot.

“The reprehensible act of unprovoked firing by India on the UNMOGIP officers is indicative of a new low in the conduct of Indian occupation troops,” he said.

He said this year alone, India had committed 2,992 ceasefire violations to date, resulting in 27 martyrdoms and serious injuries to 249 innocent civilians, including 92 women and 68 children.

The Spokesperson said Pakistan called upon India to respect the 2003 Ceasefire Understanding, investigate such incidents of deliberate ceasefire violations and maintain peace along the LoC and the Working Boundary (WB).

The Spokesperson said Pakistan had information from credible sources that India was planning to undertake a military misadventure or so-called surgical strike across the LoC and international border, for which it was trying to seek understanding from major powers.

He said a series of events and developments had exposed the real face of India to the world community. He recalled that the recently released dossier by Pakistan had left no doubt about Indian state-sponsorship of terrorism.

He said Pakistan’s Armed Forces were fully prepared to defeat Indian designs. “Any miscalculation will result in global embarrassment for India, as it faced in 2019,” he warned. He said any ill-considered misadventure by India would face an “assured notch-up military response from Pakistan”.

The Spokesperson said such a scenario would, however, seriously destabilize the region with catastrophic consequences, the fact also been shared with important world capitals.

Zahid Chaudhri said any military conflict between Pakistan and India wouls also seriously undermine the peace prospects in Afghanistan, for which the entire responsibility would rest with India.

He said Pakistan urged the international community to advise India against any irresponsible act and to desist from any action that would jeopardize regional peace and stability.

“We also warn the Indian political and military leadership to know that their mindset and sinister designs are well known to us,” he said.

The Spokesperson said the World Bank in its half-year report on ‘Private Participation in Infrastructure (PPI)’ had declared Pakistan the fourth highest recipient of investment commitments during the first half of 2020.

He mentioned that the report attributed Pakistan’s entry into the top five, to the financial closure of the Thar Power Plant, with US$1.9 billion of investment commitment.

“The World Bank report is a testimony to Pakistan and China’s mutual commitment that the COVID-19 pandemic would not slow down CPEC projects,” he said.

The Spokesperson said Pakistan welcomed the decision by the government of Canada to positively revise its Travel Advisory while lowering the overall risk level for Pakistan.

Earlier, in the wake of the safe environment provided by Pakistan, the United Nations had re-designated Islamabad as a family station for its personnel.

He said several other countries like the United States, the United Kingdom, Norway and Portugal had also revised their Travel Advisories for Pakistan.

“These revisions in the travel advisories are a manifestation of the fact that the international community has recognized that overall security environment in Pakistan has improved,” he said.