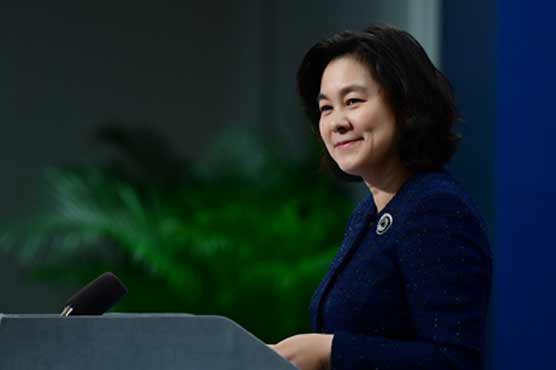 “CPEC is an important pilot programme in China and Pakistan joint efforts to build the Belt and Road Initiative (BRI) and there has been a major progress recently especially in infrastructure and energy projects,” Chinese Foreign Ministry’s Spokesperson Hua Chunying said in response to a question about speech of Chairman of CPEC, Authority, Asim Saleem Bajwa at the 11th International Infrastructure Investment and Construction Forum (IIICF) in Macao Special Administrative Region.

“Many roads were built creating job opportunities and boosting economic development in relevant area and benefiting the people there. It has been applauded by people in Pakistan,” she added.

Hua Chunying said that after Covid-19 broke out, the CPEC projects went on as usual playing an important role in Pakistan’s presumption of economic growth. The recent meeting of 14th Five-Year Plan, blueprinted the future development.

“The two sides attach importance to this project and work together to implement our leaders’ consensus and vow to carry out good jobs with existing projects, focus more on livelihood, industrial and agriculture cooperation,” she added.

The spokesperson remarked that both China and Pakistan were committed to turn the CPEC into a demonstration project for the BRI and bring greater benefits to both countries and the region.

Speaking at the forum, the Chairman of the CPEC Authority said that the CPEC was a major pilot project of the Belt and Road Initiative.

Over the past five years, there were 22 construction projects under the framework of CPEC, covering roads, railways, airports, thermal power, hydropower, renewable energy, Gwadar Port, special economic zones and other areas.

“In face of the novel coronavirus, all CPEC projects have been moving forward, bringing hope for a future of peace and economic growth,” he added.

He said that infrastructure investment and construction would be a key to reviving the jobs market and national economies.

“Under CPEC, no project has been suspended for construction, and no worker has been laid off,” he told the gathering via video from Islamabad.

Later at the forum, Moin ul Haque, Pakistan’s ambassador to China, invited members of the audience to applaud Chinese officials who made it possible for projects such as Lahore’s Orange Metro Line subway system to be completed.

The 11th IIICF brings together ambassadors from 32 countries, senior executives from over 20 financial institutions, and representatives of top contractors and engineering equipment companies, international consulting firms, and engineering and construction services.

More than 1,000 people attended the first day of the conference -the largest public event in Macao so far this year.