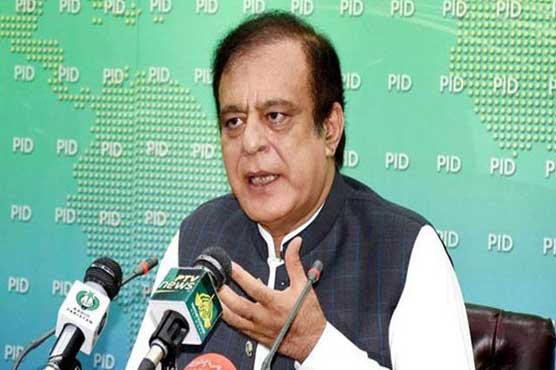 ISLAMABAD (Dunya News) - Minister for Information and Broadcasting Senator Shibli Faraz said that the people threw in dustbin the narrative of Pakistan Democratic Movement (PDM) and Nawaz Sharif and voted in favour of Pakistan Tehreek I Insaf (PTI) in the election of Gilgit Baltistan awarding the party a majority.

Addressing a press conference here, he said people and candidates in Gilgit Baltistan took part in elections and the democratic process and some candidates won and some lost.

This time those persons lost elections who were campaigning in Gilgit Baltistan for a month and were on nerves of people, he added.

The minister said opposition claimed that the elections will be a referendum but the people rejected it in the polls.

The people of Gilgit Baltistan voted with a democratic mindset and chose their progress, prosperity, development and bright future, he added.

The minister said the senior most leadership of opposition campaigned for the elections but they did not have moral reason to tell on which basis they wanted vote of people.

Both parties in their ten year tenures did nothing for the people in the sectors of education, health and industry and only paid lip service, he said adding the media fully covered the election campaign with their cameras and teams.

The minister said the opposition was talking about rigging before and after the election.

Opposition was changing its narrative and now it was being said that people of Gilgit Baltistan always go with the federal government.

Shibli stressed that the elections were free, fair and transparent adding PTI could have win more seats if the opposition’s claims of rigging were accepted.

Pakistan Tehreek i Insaf got the majority in the elections, he said adding for the opposition only those elections were fair in which it will win.

Opposition did the same thing in 2018 and cried about rigging without giving any proofs, he recalled.

The minister said PTI waged struggle for transparency in elections and it raised the issue of rigging in 2018 in the Election Commission, Parliament, the courts and four constituencies were opened on its demand.

Opposition sitting in assemblies was getting paid while Maulana Fazlur Rehman contested election in the Parliament for the post of President. Shahid Khaqan Abbasi lost the election from his home constituency and then he won the National Assembly seat from Lahore.

He said leaders of opposition parties did not want to pursue allegations of rigging further admitting that the elections in Gilgit Baltistan were fair.
He said the Sharif family, ministers of PMLN, and its second tier leadership were involved in corruption.

Now the Federal Investigation Agency (FIA) and anti corruption department with the permission of the courts would go after corrupt people in political parties. “We have data and we will go after the corrupt as people of Pakistan have given the mandate to PTI to hold the corrupt accountable.”

He said political victimization occurred when a case was filed against Prime Minister Imran Khan when he was not in the government and after fighting a case for one year and putting proofs before the court, he was declared honest and truthful.

Maryam Nawaz was beneficial owner of Avenfield apartments in London and faced charges on which many people were disqualified, he observed and said the opposition built a narrative of political victimization while Nawaz Sharif was acting as a don.

There should be difference between honest and corrupt persons and merit should be observed, he added.

Shibli said PTI would ensure rule of law in the country and it will go after the corrupt.

The PTI government was observing austerity and nobody was living a pompous life in the Prime Minister House as happened in the past, he added.

To a question, he said the government will bring further changes in the election laws to introduce electronic voting and show of hands in the election in Senate as a part of its efforts to make the process transparent.

The government will strengthen democracy by following the rule of law, he said adding opposition would have to tell how its leaders accumulated assets of billions of rupees.

He thanked the people of Gilgit Baltistan for giving PTI nine seats of the assembly.