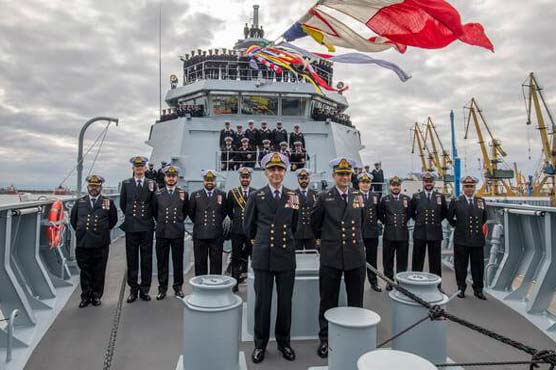 As a responsible and futuristic force with the intention to maintain regional peace, Pakistan Navy has continually sought to fortify national security against the pervasive threats. The strategic environment of the region is becoming complex day by day therefore Pakistan is also upgrading its arsenal so as to counter the threat and ensure peace of the region by maintaining a balanced naval force.

Consonantly, Pakistan Navy has been assiduously active to make the maritime frontier of Pakistan impregnable by employing a credible deterrence approach. Thus, Pakistan Navy over the recent years, with the intention to maintain its sustained lethality and credibility, has inducted various vessels in the fleet with the potential to perform a wide range of missions. PNS TABUK corvette is one such acquisition by Pakistan Navy with the capability to add significant defensive and offensive skills to the navy through modern strategic sea deterrent.

Study results show that the introduction of smaller combatants into the fleet will not only increase capacity to conduct maritime operations, but it will also free other critical assets for more efficient mission distribution.

Pakistan’s Ministry of Defense Production signed a deal with Dutch contractor Damen Shipyards Group in 2017 for two offshore patrol vessels. Similar to the first ship PNS YARMOOK; PNS TABUK is multi-purpose 2300 tons warship built by the Damen Shipyard. Traditionally, ships in the Pakistan Navy are named after historical events or figures. PNS TABUK is named after the War of TABUK (Ghazwa-e-Tabuk) held in 630 A.D. against the Byzantines.

Corvettes, during the Age of Sail, were one of the smaller warships having a single deck of guns. They are very closely related to sloops of war. In history, the role of the corvette consisted mostly of coastal patrol, fighting minor wars, supporting large fleets, or participating in show-the-flag missions.

Designed by the British naval designer William Reed, the modern corvette appeared during World War II for the first time, as a convoy escort vessel and an easily built patrol vessel. In the late 20th and early 21st centuries, contemporary navies began a trend towards smaller and more navigable surface capability which led to the induction of the corvette into the fleet. Corvettes have a displacement between 500 and 3,000 long tons and measure 180–420 ft (55–128 m) in length.

The Damen offshore patrol vessel range has been developed for navies and coastguards to accomplish an assortment of missions, including humanitarian tasks, military security and safety. The newly inducted ship is a cutting-edge anti-ship and electronic warfare platform that has a terminal defense system and advanced self-protection. It is also capable of performing diverse maritime operations and can transport UAV (Unmanned Aerial Vehicle) and helicopters, concurrently.

The ship has two high-speed RHIBs (rigid-hulled inflatable boats) of medium size. Damen has a record of building about 40 vessels of the security and defense sector which include quite a few sophisticated vessels made for Royal Netherlands Navy along with the flagship of Romanian Border Police demonstrating its professionalism and capability for shipbuilding. Contemporarily, maritime security has immense significance for economic growth and expansion because of its connection with the state’s economy.

The economic potential of the Gwadar deep seaport has drawn a myriad of perils that the Pakistan Navy has to deal with. The newly inducted corvette PNS TABUK along with the PNS YARMOOK will prove to be a force multiplier for the Pakistan Navy in the long run. Furthermore, the expansion of the Exclusive Economic Zone (EEZ) of Pakistan about 350 nautical miles away from the coast has increased responsibilities of the Pakistan Navy. The development of the deep seaport of Gwadar as part of the CPEC (China-Pakistan Economic Corridor) has made Pakistan a fundamental trade platform.

The acquisition of PNS TABUK will help Pakistan to secure its Sea lines of Communication (SLOCs) more efficiently in the IOR by neutralizing the Indian threat. In this respect, PNS TABUK being a technologically advanced vessel will amplify Pakistan Navy’s capabilities to deal with challenges to preserve peace and stability in the IOR.