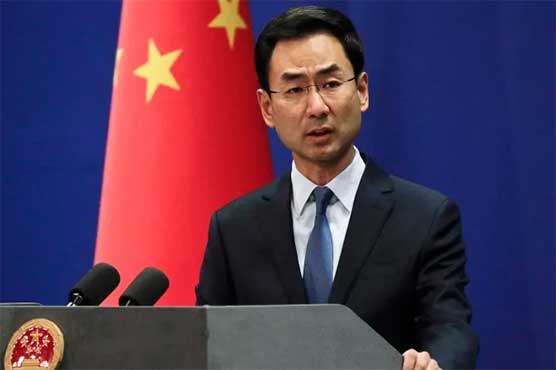 The spokesperson said that the projects completed under the CPEC

BEIJING (Dunya News) – Chinese foreign ministry spokesperson said on Wednesday that seven years after the launch of China Pakistan Economic Corridor (CPEC), major progress had been achieved with many projects started or completed bringing more than US$25 billion of direct investments to Pakistan.

Last month as an early harvest project, the Orange Line was made operational marking the beginning of the subway era for Pakistan, he said.

The spokesperson said that the projects completed under the CPEC, a pilot project of the Belt and Road Initiative (BRI) launched by China under the dynamic leadership of President Xi Jinping, had enhanced infrastructure and power supply in Pakistan and created employment opportunities for the locals and contributed towards the growth of GDP.

These projects enhanced infrastructure and electricity supply in the country and created more than 70,000 direct positions and contributed 1 to 2 percentage points of the country’s GDP growth, he added.

Giving example of Afghanistan which was importing food and other essential items from the Gwadar port, he noted that the CPEC had not only promoted development in the two countries but also helped regional connectivity and prosperity.

“Gwadar port, since first half of this year, started shipping cargo, weighing about 20,000 tons that carried wheat, sugar and fertilizers to Afghanistan. This created about 1,000 jobs”, he added.

Reiterating support to the flagship project which was launched after the consensus of the leaderships of the two countries, he said, China’s support to CPEC will continue as two countries will work together to implement our leaders’ consensus.

Existing programs were focusing more on cooperation in livelihood, industry and agriculture to change the CPEC into a demonstration project of high quality BRI development and to bring more benefits to our two countries and the region, he added.

Appreciating the positive remarks made by Pakistan’s top leaderships towards the CPEC projects, spokesperson said, “We have noted the remarks about CPEC which is an important pilot project and flagship projects of China-Pakistan cooperation and BRI development”, he said.

Last month, China had lauded President Dr. Arif Alvi’s remarks about the CPEC and terming it as a visionary pilot project of Belt and Road Initiative (BRI).

In an interview, President Alvi had expressed optimism about the future of Pakistan and said, as a result of CPEC projects, Pakistan was going to emerge as international geo strategic economic hub.

In response to a question about third party and other countries participation in the CPEC, he said that the Chinese side would welcome interested countries to join CPEC and other projects of BRI to jointly contribute to regional and global stability and prosperity.