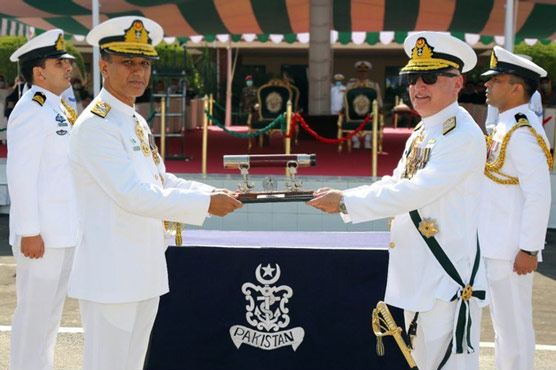 A guard of honour was presented to the outgoing naval chief at the ceremony.

According to details, change of command ceremony was held in federal capital where Admiral Zafar Mahmood Abbasi handed over command to the new chief of the Pakistan Navy.

Admiral Amjad Khan Niazi was commissioned in the Operations Branch of Pakistan Navy in 1985. He is also a recipient of the Hilal-e-Imtiaz (Military) and the Sitara-e-Basalat.

Admiral Zafar Mahmood Abbasi said he was proud that he was given the honour of defending Pakistan and leading charge of the navy.

He said the naval force of today is fully capable to defend the motherland and thwart nefarious designs against the country.

Admiral Zafar said that during his tenure, he focused on improving professional capabilities of the Navy. PNS Yarmook has been inducted in the Pakistan Navy while PNS Haibat will become part of the force at the end of 2020.

He further said that Pakistan Navy participated in several exercises in 2018 and with cooperation of China, steps are being taken for establishment of economic zone.

A guard of honour was also presented to the outgoing and incoming naval chiefs at the ceremony.