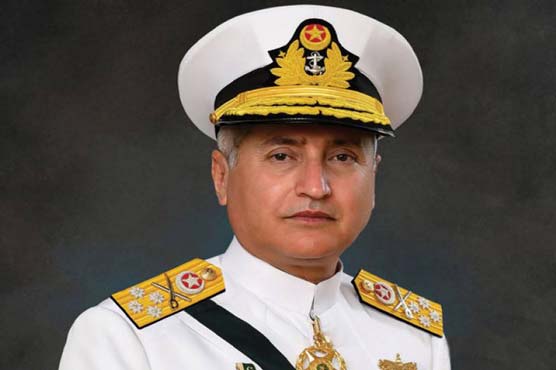 (Dunya News) – Every year, 8th September is celebrated as Navy Day by Pakistan Navy to acknowledge the sacrifices and spirit of our Naval heroes who epitomized grit, courage and valour during the 1965 War. The Chief of Naval Staff Admiral Zafar Mahmood Abbasi NI(M) has issued a statement commemorating the day.

It says that 8th September reminds us of the heroic deeds and daring achievements of our Ghazis and Shuhadas who fought gallantly and humbled a much bigger adversary with their absolute faith in Allah SWT and profound self-belief. This day marks a golden chapter in our rich naval history and rekindles hope and pride in our new generation.

On the night of 7/8 September 1965, a Flotilla comprising seven ships of Pakistan Navy, in a daring operation code named ‘SOMNATH’, bombarded Indian port of Dwarka. The swift and accurate action not only destroyed important shore installations which included Indian radar station and a radio beacon directing Indian Air Force Bombers for attacks on Karachi, but also inflicted irreparable damage to the Indian pride.

PN lone Submarine Ghazi reigned supreme and remained unchallenged at sea throughout the war. Her ominous presence in the vicinity of Indian port, kept the Indian Navy Ships including their Aircraft Carrier, besieged in the harbour and rendered it ineffective to play any role or influence the course of war.

Today PN is recognized as a potent naval force in the region. It is a key partner of international navies in collaborative maritime security initiatives and has also launched its own initiative of Regional Maritime Security Patrols (RMSP) to provide secure maritime environment for the good of global commons.

With the realization of CPEC Project, PN is alive to its growing responsibilities and role in the success of this project of vital national importance. The security in and around the port of Gwadar, which is the lynchpin of CPEC is under special focus. The Navy is fully capable and vigilantly guarding country’s maritime interests.

PN is also spearheading various initiatives to jump start Pakistan’s Blue Economy in line with the Govt’s renewed focus on the maritime sector and its decision to declare 2020 as the ‘Year of Blue Economy’.

In a significant development, PN in collaboration with China Geological Survey (CGS), the leading Chinese organization in offshore marine scientific research is facilitating complete and systematic geological investigation within Pakistan’s Exclusive Economic Zone (EEZ) for mapping and exploration of offshore hydrocarbon resources. Two exploration surveys by CGS Ships have been conducted so far and preliminary findings are promising, indicating presence of various geological features associated with hydrocarbon reservoirs. Third joint expedition with CGS is planned during 2021. PN besides its core task of maritime defence of the country is committed to the development of maritime sector and bringing the dividends of Blue Economy to the nation.

As we commemorate the spirit of Navy Day, all ranks of Pakistan Navy reiterate solidarity with their Kashmiri brethren and denounce the blatant annexation of Indian Illegally Occupied Jammu & Kashmir (IIOJK). Pakistan will continue to support Kashmiris’ just struggle till the resolution of Kashmir issue, in accordance with the aspirations of Kashmiri people and relevant UNSC Resolutions.

Today, Officers, Men and Women of Pakistan Navy renew their resolve and commitment to stand firm in the face of any adversity and defend our beloved motherland, to the last man and the last drop of our blood, the statement said.