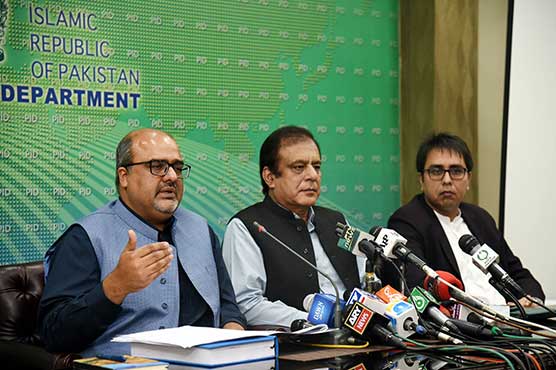 ISLAMABAD (Dunya News) – Special Assistant to the Prime Minister on Accountability and Interior Ministry and chief of the Assets Recovery Unit (ARU) Shahzad Akbar on Thursday said that today is a historic day for the country as no previous government had the courage to form such a commission.

Addressing a press conference highlighting contents of Sugar Inquiry Commission report, he said that neither have investigations been conducted over such matters in the past, nor has any government had the courage to make the investigations public.

He said sugar inquiry commission was established to ascertain the reasons of increase in sugar prices in the last few years. He said an inquiry committee headed by DG FIA Wajid Zia was established by the Prime Minister which recommended for forensic audit of this matter. Mirza Shahzad Akbar said the commission gave its detailed report to special cabinet meeting.

Shahzad Akbar went on to say that the sugar inquiry commission was set up because there has been a cycle of sugar price increases from December 2018 to August 2019, where prices were hiked up to 33%, which, in rupee terms, translates to Rs17 per kilogram.

He said the report explicitly says that sugar mill owners pay an amount to sugarcane growers even lower than the support price. In addition, all sugar mills make cuts in the weight of sugarcane of 15 to 30 percent.

Shahzad Akbar said the Commission also found irregularities in the form of giving advance payments to farmers in the form of cash or commodity, which is akin to unregulated banking.

He said PM Imran Khan has also directed all government advisors to declare their assets to ensure transparency.

The special assistant said a subsidy of 29 billion rupees was given to sugar industry in the last five years, adding that it was found that total income tax of around 88 sugar mills of the country is ten billion rupees, after getting a tax refund. He said six big groups of Pakistan have a 51 percent share of the sugar industry.

He said that the price of sugar in the market increases through various tactics and rising prices only hurt the general public.

He further said that sugar was exported to Afghanistan but there was no match when the sugar export data was checked and there was a difference of billions. This is a joke that has never been checked, he said.

Akbar went on to say that six major sugar groups were audited and Pakistan Muslim League-Quaid (PML-Q) leader Moonis Elahi and Omar Shehryar have shares in the ownership of Alliance Mill.

He said sugar mills belonging to Jahangir Tareen s group were found guilty of "double billing" and "over-invoicing" as well as "corporate fraud". Mentioning the JDW Sugar Mills in which Jahangir Tareen owned 21 percent shares, he said according to the report, the mill management was involved in double booking, under-reporting and over-invoicing. It under-invoiced sales from bagasse and molasses, which resulted in 25 percent cost inflation. The mill was involved in forward sales, satta and benami sales.

Speaking of Khusro Bakhtiar, he said that his brother is the one who owns a sugar mill and does not hold political office. "We cannot ask Khusro Bakhtiar to resign from his post (as minister for food security). An inquiry will be initiated against whoever is directly involved."

He said that the company owned by Shehbaz Sharif s family engaged in "double reporting". He said the Al-Arabiya Sugar Mills owned by Salman Shehbaz Sharif was also audited, which found to be involved in a fraud of Rs 400 million through informal receipts and market manipulation.

He said the audit of Alliance Sugar Mill from Rahim Yar Khan partially owned by Pakistan Muslim League-Quaid (PML-Q) senior leader Moonis Elahi, showed that between 2014 to 2018, it made a systematic cut of 11 to 14 percent of the amount it owed to the farmers, which translated to Rs 970 million.

Shahzad Akbar said the report revealed that certain sugar mills used informal receipts and it was ultimately the farmer, who was crushed because there was no official record. The mill owners showed the price of production to be more than the support price which meant that farmers earned less than the support price.

He said on the one hand, the inflated cost of production and market manipulation were being done and on the other, accounting fraud was also being committed by the sugar mill owners.