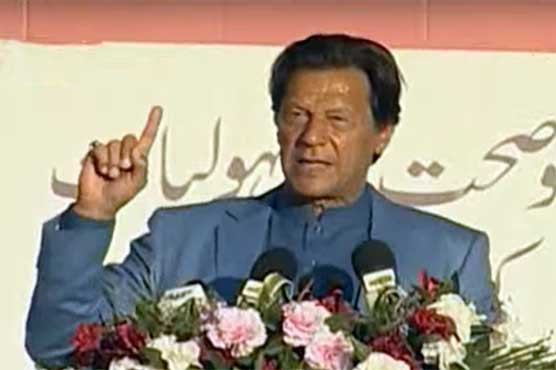 I never said that we will make Pakistan an Asian tiger: PM Imran

LAHORE (Dunya News) – Prime Minister Imran Khan on Saturday admitted that wheat and flour crises happened due to government’s negligence. He said that he knows who benefited from the recent wave of inflation.

Prime Minister was addressing distribution ceremony of Sehat Insaf Card at Governor House, he said that government was making a system which will identify in the future about any product that is about to be short in supply. Government is conducting an investigation into recent crises and it is slowly getting to know who was involved, he added.

He further added that the reason behind building Shaukat Khanum Hospital was because he can never forget the face of a cancer patient at Mayo Hospital.

He claimed that one of the biggest reason behind PTI‘s two-third majority in KPK is the health cards system. For the first three to four years, the state of Madina was in great turmoil and the distribution of these health cards is just another step towards state of Madina, he added.

Earlier, Prime Minister Imran Khan held an important meeting with CM Punjab and directed him to expedite operation against hoarders and adulteration mafia.

On this occasion PM Imran Khan said that he approved an Rs15 billion relief package to provide relief to the masses as availability of everyday commodities at reasonable prices to the poor is among government’s top priorities.

PM launched global portal of ‘Police Khidmat Markaz’ during his visit to Safe City office and said that portal will facilitate overseas Pakistanis. Launch of global portal is a praiseworthy step by the police, he added.

PM further said that overseas Pakistani’s would hesitate to invest in Pakistan unless government provides safe environment. He added that economic growth is linked with improvement in law and order situation and wealth creation.

According to sources, the premier was also briefed on the scope of safe city project during his visit to the Punjab Safe City Authority headquarters and about making security effective through the project.