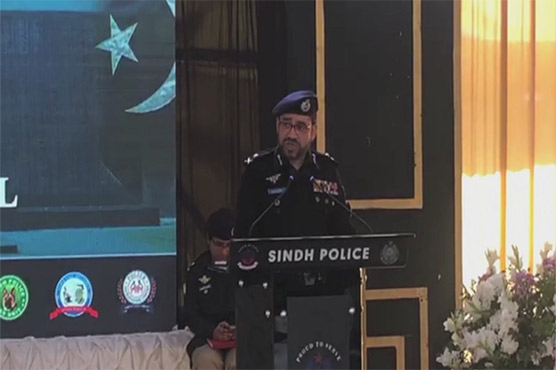 KARACHI (Dunya News) – Sindh Inspector General of Police (IGP) Dr Kaleem Imam, while reacting to certain speculations that he has been transferred from his post, said on Tuesday that he “won’t leave that easily and he has not yet been transferred.”

“A big conspiracy was built against me.

This ceremony is being considered as my farewell ceremony […] It seems like Sindh police are trying to save its budget,” he added.

Later, Dr Kaleem, contradicted himself and gave clarification on his today’s remarks that his comments were presented wrongly on the media.

“I used the word “conspiracy” in a joke when I was addressing officers during a ceremony,” he said.

Meanwhile, Prime Minister Imran Khan is presiding over a meeting of the federal cabinet in Islamabad to analyse overall political and economic situation of the country, in particular the matter of appointment/transfer of Sindh IG Dr Kaleem Imam.

According to sources, several members of the cabinet and government allies have raised reservations over the names nominated by the Sindh government for the post of IGP.

The federal cabinet has recommended consultations of Sindh Governor Imran Ismael and CM Murad Ali Shah to reach consensus over the matter.

Some members suggested considering five names forwarded by the Sindh government for the same post.
The cabinet has also observed that any new name for the Sindh IGP could also be considered.

Yesterday, Sindh Chief Minister Murad Ali Shah held a meeting with Prime Minister Imran Khan during the premier’s day-long visit to Karachi, and expressed approval to the request of the CM for replacing Dr Imam as the IGP.

During the meeting held at Governor House in Karachi, matters pertaining to federal government-funded development projects in the province especially in Karachi came under discussion.

A statement issued by the Sindh chief minister’s spokesperson stated that Shah in his meeting with Prime Minister Imran discussed various issues including development schemes, wheat shortage, locust swarm attacks, increasing polio cases and the threat of coronavirus to Pakistanis.

"The prime minister assured the chief minister that all these issues would [be] resolved on top priority basis," the statement said.

Sources familiar with the matter told the media that Sindh Governor Imran Ismail had also supported the Sindh’s request for replacement of the IGP. During the meeting, it was agreed that one of the nominated officers by Sindh will be the new IGP, while the premier was also apprised about the decisions and reservations of the Sindh Cabinet.

The Prime Minister also met the Grand Democratic Alliance (GDA) delegation that expressed their full confidence in Khan’s leadership and assured him of full cooperation. The political situation of Sindh was also discussed in detail during the meeting.

Earlier, in response to a letter by the Sindh government seeking removal of Dr Kaleem Imam, the federal government prevented the transfer of IG’s charge to the Additional IG till the “competent authority” reaches a decision on the matter.

In the Centre’s letter to the Sindh’s chief secretary dated Jan. 17, the government’s establishment division stated that the issue of repatriation of IGP Imam and the posting of his replacement, as requested by the Sindh government, is being taken up by the relevant authority and once a decision is reached on the issue, it will be shared with the provincial government.

“Till then Dr Kaleem Imam will continue to discharge his duties as the IGP of the province. Look after charge of the post cannot be assigned to any additional inspector general of police by the province,” the letter read, clearly outlining that the authority to change the IGP stands with the federal government.

According to the police law, an IGP could be appointed after consultations between the federal government and the government of the said province.

Section 12(2) of the Sindh (Repeal of the Police Act, 1961 and Revival of Police Order, 2002) (Amendment) Act, 2019 reads: "The provincial government or the federal government may for ‘compelling reasons,’ in consultation with each other, repatriate, or recall, the inspector general of police, as the case may be."

The provincial government provided reasons for Dr Imam’s removal as his alleged “non-cooperation with the Sindh government, and failure to implement directives issued from the CM House,” and frequent absence in key meetings of the government.