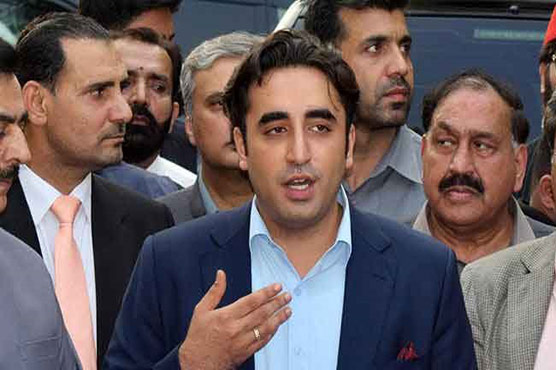 KARACHI (Dunya News) – Pakistan Peoples Party (PPP) Chairman Bilawal Bhutto-Zardari on Tuesday criticised the way Prime Minister Imran Khan has been running the affairs of the state, and termed it “equivalent to not one but two Pakistan”, and recalled that the premier had raised a slogan of “not two but one Pakistan” in his election campaign in 2018.

Mr Bilawal inaugurated Dhabaji pumping station in Karachi for the water supply of 100 million gallons daily (MGD) from Indus River to the city.

Later, in his talk to the media, the PPP chairman stated: “In one Pakistan, there should be one law […] if an IG (inspector general) can be changed in Punjab, then the same rule should be allowed for Sindh as well.”

Mr Bilawal complained of difference of rules applied to Punjab and Sindh when their IGs are changed, and added “Punjab chief minister is not even aware of when the province’s IG gets changed.”

“Despite of availability of less resources, the Sindh government has been working hard […] more work will be done when public governments come into power,” he said.

“Government’s every decision brings misery for the people […] in our province, the public ask us about these matters […] do you still consider Sindh a colony?” he questioned. He said the PPP has always helped the poor segment of the society.

“Why the blame is put on the Sindh government if the wheat crisis is prevailing across the country?” he asked.

“We’re asking for our right, and we’re not threatening someone that we would suspend their gas supply […] the government is damaged even the Centre,” he said, adding that Sindh and Balochistan deserved more share in energy constitutionally while producing gas.

Mr Bilawal said gas crisis has been created due to injustice, and claimed that the government economic policy was against the public.

“We will not let the Centre snatch Sindh’s rights,” he stated, adding that not even once the premier initiated any project in the province.

“There isn’t much difference in the economic policies of PTI and PML-N […] the Centre is sabotaging the K-IV project as the federal government had made a commitment with us to coordinate for progress of the project.”