Confrontation in region not beneficial for any party: FM Qureshi 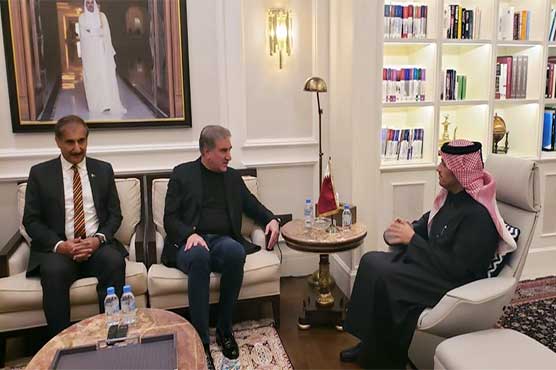 Confrontation in region not beneficial for any party: FM Qureshi

DOHA (Dunya News) - Foreign Minister Shah Mehmood Qureshi in a meeting with Qatar’s Foreign Minister Mohammed bin Abdulrahman bin Jassim Al Thani said that confrontation in the region will not be beneficial for any party and efforts should be made to resolve issues through diplomatic efforts.

Two foreign ministers held detailed discussion on using diplomatic efforts should be used to overcome the tensions in the Middle East. Shah Mehmood Qureshi also apprised his Qatari counterpart of Pakistan s efforts to end tensions in the region and maintain peace in the region.

The Foreign Minister also informed Qatari counterpart about India s grave human rights abuses in occupied Kashmir, saying that 80 million Kashmiris in the occupied valley are subjected to lockdown and imprisonment for the last five months. Oppressed Muslims of occupied Kashmir are looking for help from the Muslim Ummah to get rid of Indian tyranny.

Shah Mehmood Qureshi said Pakistan has a historic, brotherly relationship with Qatar and values bilateral relations with Qatar and seeks to enhance multilateral cooperation between the two countries.

The Foreign Minister said that confrontation in the region will not be in interest of any party. Efforts should be made to resolve the issues through diplomatic efforts.

Shah Mahmood said that Pakistan s sincere, reconciliatory efforts for peace in Afghanistan are gaining momentum globally. The restoration of dialogue between the Afghan Taliban and the US has led to the end of the 40-year-long conflict, paving the way for peace in the region.

He informed Qatari Deputy Prime Minister and Foreign Minister about his recent visits to the region and telephonic communication with various foreign ministers.

He said that Pakistan always encourage the parties to avoid confrontation and resolve the issues through diplomatic means so that the peace of the region is not at risk.