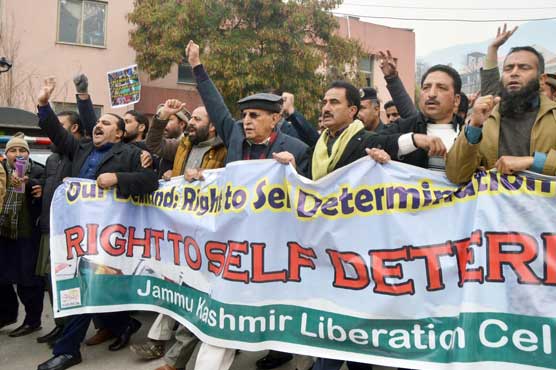 Leaders and activists of All-Parties Hurriyat Conference held a rally outside Indian High Commission in Islamabad to draw attention of the international community towards Indian atrocities.

In Muzaffarabad participants of the rally including Prime Minister Azad Kashmir marched to UN Observer Mission office and submitted a memorandum. On this occasion, PM of Kashmir said that as per UN resolutions Kashmiris have the right to bend the control line.

Rallies were also held in Mirpur, Bhimber and Kotli, in which a large number of citizens participated. Protesters urged the international community to grant Kashmiris the right to self-determination.

A rally was organized in Bahawalpur to show solidarity with Kashmiris. Kisan Board and Civil Society of Mandi Bahauddin organized a rally to strongly condemned Indian aggression in the occupied valley.

Rallies were held in solidarity with Kashmiris in different areas of Punjab, including Mian Channu and Khanpur. In various cities of Sindh, including Hyderabad a large number of citizens took to the streets on the occasion of Self-Determination Day and demanded that the international community should intervene to stop Indian atrocities.

A rally was also organized in Sui area of Dera Bugti to show solidarity with Kashmiri brothers.