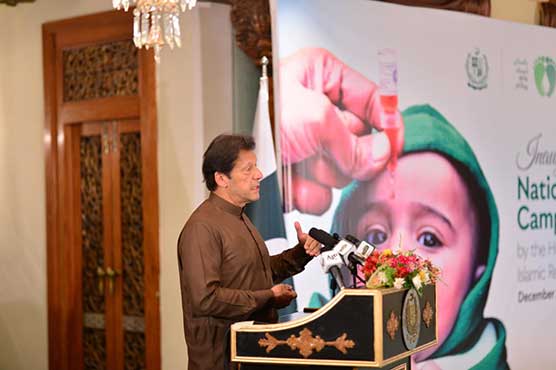 Addressing the ceremony in Islamabad on Friday, he said that 40 million children under five years of age will be administered anti-polio drops by 260,000 polio staff during the campaign.

The prime minister said Pakistan is among the very few countries that still have traces of polio, despite numerous successes rendered by polio staff. Imran Khan said polio is a crippling disease with lot of repercussions on the population.

Imran Khan urged the parents to actively seek administering anti-polio drops to their children, should they miss the campaign.

He said the eradication of the polio virus was vital for both the children as well as the future of the whole nation and advised the mothers, having children of up to five years age, should approach the vaccination centers personally in case they were missed by the vaccination teams.

Terming the polio workers heroes, he said they had sacrificed a lot in their endeavor to purge the country of the polio virus, adding that they had been target killed by the militants and also braved harsh weather conditions and visited risky areas to vaccinate the children.

PM Khan amid the national economy getting stability, increasing exports and enriching the country’s positive outlook, it was essential to eradicate the polio to continue the pace of national development.

The prime minister also thanked the donors for extending their cooperation to Pakistan in its course of becoming a polio free nation.