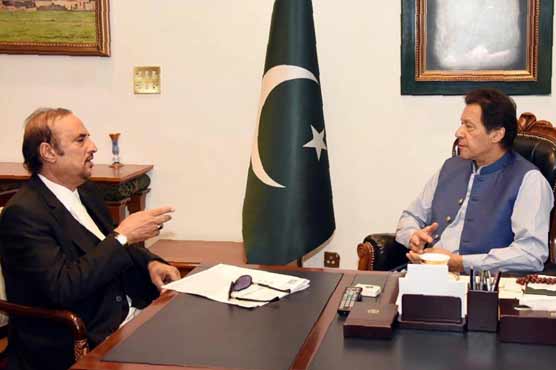 During the meeting, Babar Awan briefed the prime minister regarding legal and constitutional framework.

Speaking on the occasion, Awan said that the PTI has submitted all the financial data in the Election Commission of Pakistan (ECP), adding that the audit of the PTI accounts was also conducted from time to time.

He said that the prime minister who lives on his own expense in the house doesn’t need foreign funding but those having fake accounts needed the foreign funding.

PM Imran said that the two political parties, who are in opposition, committed money laundering on a large scale.

The prime minister said that the economy of the country is stabilizing but some elements are against its prosperity.

He maintained that the government will foil all conspiracies being hatched against Pakistan.

Earlier, PTI Leader Farrukh Habib said that his party has provided data of 40,000 donators to the Election Commission of Pakistan (ECP) in foreign funding case.

Addressing a news conference in Islamabad on Monday, he clarified that all the party s accounts are declared and each of its transactions have been made through the banking channel.

He said the PTI has laid the foundation of transparency and its Chairman Imran Khan presented all details of his assets before the apex court in Hanif Abbasi s case.

The PTI leader prayed the ECP to hear the foreign funding case of PML (N) and the PPP on daily basis, adding that the two parties will have to give their money trail and they can no longer hoodwink the masses.

Farrukh Habib said that he had filed a petition in the Election Commission of Pakistan back in 2017 pleading that the funding sources of the PPP and the PML (N) are scrutinized and investigated. He regretted that the two parties have not submitted replies in the case.

The PTI leader said the two parties have kept their accounts secret and did not declare their sources.