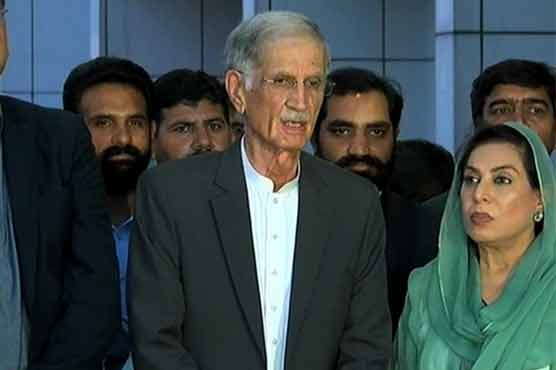 Pervaiz Khattak said that no political party would be barred from holding rally.

ISLAMABAD (Dunya News) – Defence Minister and head of government s negotiation committee Pervaiz Khattaq on Thursday reiterated that neither any of the opposition leader including Akram Durrani talked about Prime Minister Imran Khan’s resignation nor they would discuss on this.

He said this after holding meetings with the leaders of allied parties. During meeting, matters pertaining to JUI-F’s Azadi March and ongoing political situation of the country came under discussion.

Talking to media, the head of government s negotiation committee said that no political party would be barred from holding rally but neither anyone talked about PM Imran Khan’s resignation nor they would discuss on this.

On the occasion, federal minister Khalid Maqbool Siddiqui said that protest is democratic right but it should not be turned violent.

Federal Minister Fehmida Mirza appreciated government’s decision to hold talks with the opposition and said that they want to resolve all issued democratically.

According to sources, Pervaiz Khattak apprised the prime minister about details of the contacts made with the opposition and also discussed matters relating to the first meeting with Rehbar Committee.

On the other hand, JUI-F chief Maulana Fazlur Rehman said in a statement that all political parties have agreed on Azadi March, adding that the Rehbar Committee has not ruled out talks with the government committee.

He said that the Rehbar Committee will meeting government committee tomorrow (Friday).