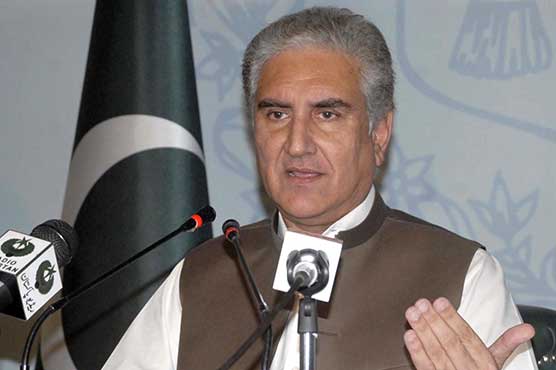 Exclusively talking to Dunya News, the minister has urged international community to take notice of Indian false allegations against Pakistan. India is facing humiliation everywhere due to its bogus narrative on Kashmir matter, he added.

The statement of the foreign minister came after Pakistan took the entire diplomatic corps for a tour to restive Line of Control (LoC) to inspect the areas hit by Indian shelling on last Saturday night and Sunday.

Invitations were extended to heads of missions of all embassies in Islamabad to visit Jura, Shahkot and Nousehri sectors along the LoC and observe the ground situation.

The Foreign Office had also extended an invitation to India’s Charge d’ Affaires Gaurav Ahluwalia to prove the claim of Indian army’s chief of hitting camps inside Pakistan, however, no official from the Indian High Commission arrived to visit the LoC.

Foreign Office Spokesperson Dr Muhammad Faisal further affirmed that India has not provided any information about locations of alleged launch pads which it had claimed of destroying inside Pakistan.

Indian forces had used mortars and artillery to intentionally target civilians in these sectors, which resulted in the martyrdom of five civilians and one Pakistan Army soldier.

The sources said Pakistan did not want a war with India, but if war were imposed, Pakistan would fight it in the same way it did on Feb 27.

Nine soldiers of the Indian army were killed and many others injured when Pakistan Army troops "effectively responded" to the latest Indian ceasefire violations, deliberately targeting civilians, in Jura, Shahkot and Nousehri sectors along the Line of Control, the director general of the Inter-Services Public Relations (ISPR) had said on Sunday.

In a series of tweets, the ISPR had stated: “Targeting innocent civilians by Indian Army is an attempt to justify their false claims of targeting alleged camps. Injured civilians evacuated to District hospitals. UNMOGIP as well as domestic & foreign media have open access to AJK, a liberty not available in IOJ&K.”