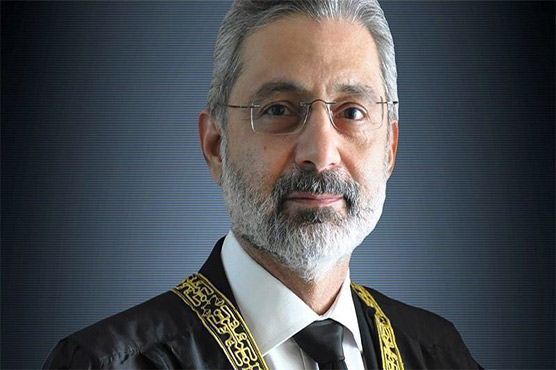 The bench has forwarded the matter to Chief Justice of Pakistan (CJP) Asif Saeed Khosa.

ISLAMABAD (Dunya News) – A Supreme Court of Pakistan’s (SCP) full court 10-judge bench – seized with a set of petitions challenging the filing of a reference against Justice Qazi Faez Isa of the Supreme Court – has been dissolved on Monday “due to unavailability of Justice Mazhar Alam.”

The bench has forwarded the matter to Chief Justice of Pakistan (CJP) Asif Saeed Khosa for formation of a new bench to hear the case.

Justice Umar Atta Bandial remarked that due to unavailability of Justice Mazhar Alam, the existing bench was being dissolved.

In the response, the court was told that Justice Isa was the original owner of three properties in Britain and was still reluctant to reveal the sources of his income used to purchase the properties.

The attorney general had further mentioned that the presidential reference postulated ‘benami’ nature of the properties abroad “which were concealed and not disclosed as required by the law.” Importantly, the wife and children of the petitioner judge had no independent source of income and were not in a position to provide funds necessary for the purchase of three properties when they were bought.

“As the attorney general, it is my responsibility to advise the council […] Justice Qazi Faez Isa’s allegations are solely based on assumptions […] transparency and accountability is an integral part of democracy,” Mr Mansoor Khan had stated in the courtroom.

The court was informed that the only conclusion which could be drawn was that the said properties were ‘benami’ in nature and the petitioner judge was the ostensible owner of these properties.

Mr Mansoor Khan had further told the court that it was not wrong for the law minister to distribute checks in the bar councils.

“No one is above the Law […] Under Article 248 the president and the prime minister are given exemption for performing their duties,” he had said, while requesting the court to dispose of the petition filed by Justice Qazi Faez Isa.