India, currently, in a state of confusion: Qureshi 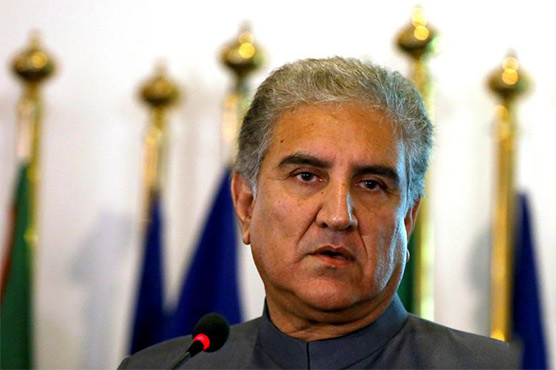 India, currently, in a state of confusion: Qureshi

"We reserve a right to defence upon provocation," the minister said.

MULTAN (Dunya News) – Following effective response by Pakistan Army in which nine Indian soldiers were killed on Sunday when India violated ceasefire across the Line of Control (LoC), Pakistani Foreign Minister Shah Mehmood Qureshi said India has been suffering from a state of confusion.

“We reserve a right to defence upon provocation,” the minister said, while urging the United Nations to take notice of India’s aggression in Kashmir.

Mr Qureshi further emphasised that the Kashmir dispute has gained momentum at the global level and a black day would be observed on Oct 27.

He also mentioned that a soldier of Pakistan Army and five civilians embraced martyrdom, while two soldiers and five civilians sustained injuries in an exchange of fire. Two bunkers of the Indian army were also destroyed in firing by Pakistani troops.

“Indian Army shall always get befitting response to CFVs [ceasefire violations]. Pakistan Army shall protect innocent civilians along LOC & inflict unbearable cost to Indian Army. Indian lies to justify their false claims & preparations for a false flag operation will continue to be exposed with truth,” a statement by him read.

"The Indian occupation forces along the LoC and Working Boundary have continuously been targeting civilian populated areas with artillery fire, heavy-calibre mortars, and automatic weapons, which still continues," an FO statement said, adding that this unprecedented escalation in ceasefire violations by Indian forces has been going on since the year 2017, when they committed 1,970 such violations.

According to the press release, FO Director General (South Asia and Saarc) Dr Muhammad Faisal urged the Indian side to respect the 2003 ceasefire agreement. He asked New Delhi to investigate these as well as other incidents of ceasefire violations and to instruct Indian forces to respect the ceasefire "in letter and spirit and maintain peace on the LoC and the Working Boundary".