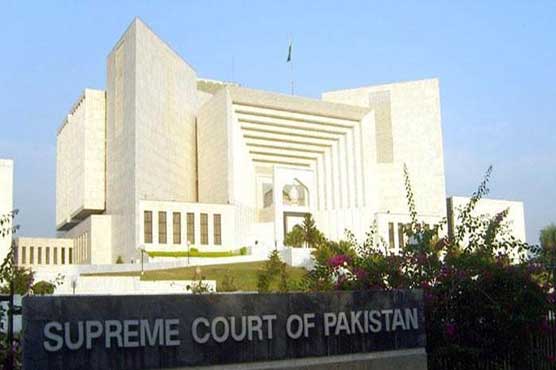 ISLAMABAD (Dunya News) – The Supreme Court (SC) of Pakistan on Friday announced verdict on judge Arshad Malik video scandal case and affirmed that the following five issues needed to be attended to by the apex court:

(i) Which is the Court or forum that can presently attend to the relevant video for any meaningful consideration in the case of Mian Muhammad Nawaz Sharif?

(ii) How is the relevant video to be established as a genuine piece of evidence?

(iii) How is the relevant video, if established to be a genuine piece of evidence, to be proved before a court of law?

(iv) What is the effect of the relevant video, if established to be a genuine piece of evidence and if duly proved before the relevant court, upon the conviction of Mian Muhammad Nawaz Sharif?

(v) The conduct of the learned Judge namely Mr. Muhammad Arshad Malik in the episode.

“It may not be an appropriate stage for this Court to interfere in the matter of the relevant video and its effects, particularly when the said video may have relevance to a criminal appeal presently sub judice before the Islamabad High Court, Islamabad.

“A criminal investigation is already being conducted into the matter by the Federal Investigation Agency, some other offences or illegalities under some other laws referred to by the learned Attorney General might also entail inquiries or investigations by the competent agencies or fora and any probe into the matter by a Commission to be constituted by the Government or by this Court may end up only with an opinion which may have no relevance or admissibility in the relevant appeal pending before the Islamabad High Court, Islamabad.

“In this view of the matter all these petitions are disposed of with the observations made.”

It is worth mentioning here that a three-member bench of the apex court – comprising Justice Sheikh Azmat Saeed, Justice Umar Ata Bandial, and headed by Chief Justice Asif Saeed Khosa – had reserved the decision on August 20 after conducting three hearings on three petitions.