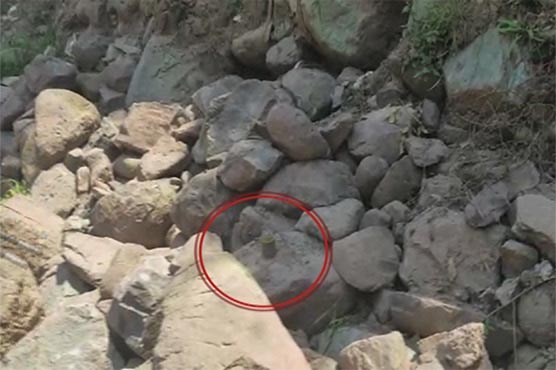 MUZAFFARABAD (Dunya News) – Undeniable evidence has been unearthed, during an exclusive coverage by Dunya News of the Line of Control (LoC) regarding Indian military’s blatant usage of cluster ammunition on the civilian populated areas.

According to reports, four civilians embraced martyrdom and 11 others sustained critical injuries in Nuseri area of Neelum Valley in Azad Kashmir.

Meanwhile, a child mistakenly carried a cluster bomb to his home, thinking of it as a toy, and suffered injuries upon its explosion. Cluster bombs are still spread in the region.

According to the International Committee of the Red Cross, “Cluster munitions kill and injure large numbers of civilians and cause long lasting socio-economic problems. In 2008, governments negotiated and adopted the Convention on Cluster Munitions. This important international humanitarian law treaty prohibits the use, production, stockpiling and transfer of cluster munitions and requires States to take specific action to ensure that these weapons claim no future victims.”

It is further said that the civilian casualties during conflict often occur because cluster munitions scatter huge numbers of explosive submunitions over very large areas.

"This treaty provides a comprehensive framework for addressing the problems associated with these weapons. It prohibits the use, production, acquisition, stockpiling, retention and transfer of cluster munitions. It also requires State Parties to destroy the cluster munitions in their stockpiles and commits them to clearing areas contaminated with unexploded submunitions or abandoned cluster munitions."