Rehbar Committee decides to give Senate chairmanship to PML-N 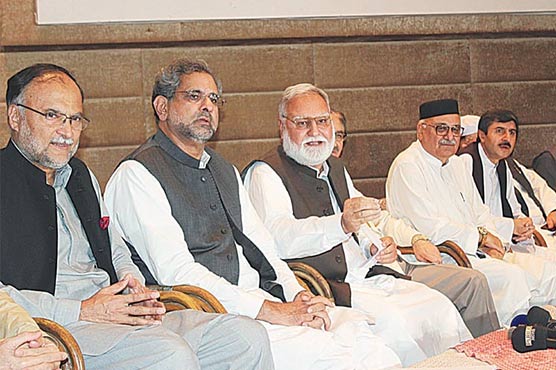 Rehbar Committee on Friday held a presser after a meeting.

ISLAMABAD (Dunya News) – The ‘Rehbar Committee’ of the joint opposition has decided to grant the chairmanship of the Senate to the Pakistan Muslim League-Nawaz (PML-N) – the party with the majority of the seats in the opposition in the National Assembly (NA), sources familiar with the matter told Dunya News on Saturday.

According to details, PML-N senators Raja Zafarul Haq, Musadiq Malik, and two others are being considered for the position.

On the other hand, the party will leave the position of the Leader of the Opposition in the Senate after getting its senator as the chairman of the Senate.

In this regard, the Rehbar Committee has also begun consultation amongst its members for the designation of the opposition leader in the Senate.

Furthermore, it has been decided that no changes will be made to the position of the deputy chairman of the Senate, which is currently held by Pakistan Peoples Party’s (PPP) Saleem Mandviwala.

Following a maiden meeting of the ‘Rehbar Committee’ on Friday, the opposition parties have reached a consensus to bring a no-confidence motion against Senate Chairman Sadiq Sanjrani on July 9 and nominate their joint candidate for the Senate chairmanship on July 11.

Rehbar Committee convener Akram Khan Durrani, the senior leader of the Jamiat Ulema-i-Islam-F (JUI-F), told the media that the joint opposition had unanimously decided to start constitutional process for removal of the chairman of the Senate.

In order to protest against what the joint opposition has been calling as ‘rigged’ General Elections 2018, the committee also decided a future course-of-action against the Pakistan Tehreek-e-Insaf (PTI)-led federal government and came on a conclusion to observe July 25 as the ‘black day’.

A major public gathering is expected to be staged in Lahore on July 25.

Durrani strongly denounced what he called ‘a new political order’ was being introduced in the country, and said: “We condemn that order as it will derail democracy.”