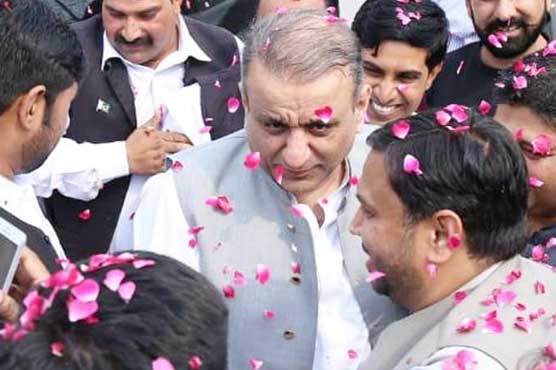 The PTI leader has been directed to submit surety bonds worth Rs1 crore each.

According to details, the PTI leader has been directed to submit two surety bonds worth Rs1 million each.

On the other hand, National Accountability Bureau (NAB) has devised a strategy for reference against Aleem Khan in connection with assets case.

The investigation officers said that a supplementary reference will be filed against Aleem Khan if they won’t get reply from United Arab Emirates (UAE) and Britain regarding the case. Sources told PTI leader is accused of making illegal assets worth Rs80 crore.

On February 6, Aleem was detained by the NAB while recording his statement in a case pertaining to an offshore company unveiled in the Panama Papers leaks.

On February 7, the court sent him on a nine-day physical remand in NAB’s custody.

During hearing of the case on February 15, the NAB’s prosecutor told the court that in 2003, Aleem Khan was an ordinary citizen and suddenly in 2007, he became millionaire with 35 companies.

The bureau’s prosecutor claimed that the PTI leader concealed his assets.

The NAB prosecutor maintained that AED30 million were transferred from Pakistan to Dubai and the accused failed to provide details.

Contrarily, Aleem Khan’s counsel stated that the money was sent from the account of Aleem’s mother and that his client has submitted all of his documents to the anti-graft watchdog body.