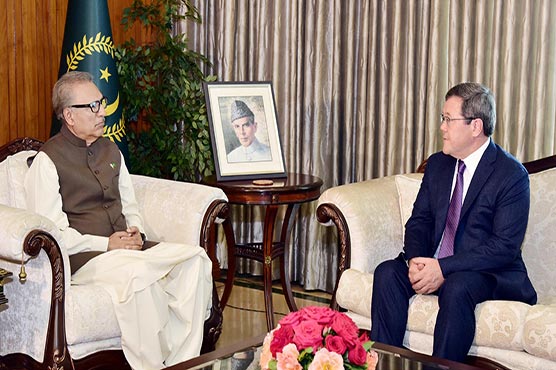 He said this while talking to Ambassador of Kazakhstan Barlybay Sadykov, called on him at Aiwan-e-Sadr.

The president said both brotherly countries enjoyed close and cordial relations based on shared faith, culture and heritage.

The president noted existing trade level between the two countries was not commensurate with the obsessed trade potential. He urged Kazakhstan to facilitate access of Pakistani commodities in Kazakh markets.

Stressing for the need to explore more possibilities of mutual cooperation, the president highlighted the opportunities of having joint ventures in sectors like food processing, textile, machinery and equipment, construction and infrastructure.

The president underscored the need for establishing air and land connectivity between the two countries, as Pakistan could provide Kazakhstan the shortest route through the newly developed Gwadar port.

The president expressed pleasure over strengthening defense cooperation between the two.

He also appreciated the principle position taken by Kazakhstan for non-discriminatory expansion of the Nuclear Suppliers Group’s membership.

The president underlined Pakistan was extending e-visa facilitation to 175 countries including Kazakhstan, and urged Kazakhstan to consider introducing easy visa process for Pakistani tourists and businessmen as well.