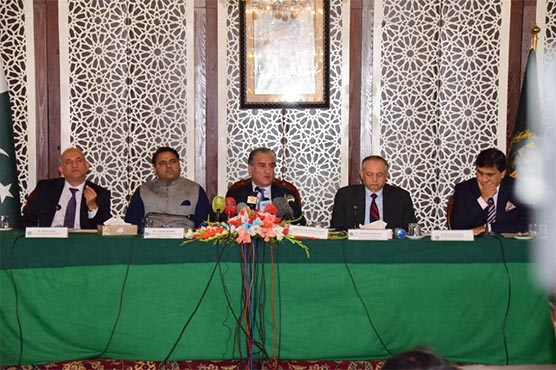 He asked the world community to take notice of India's double standard on the issue of terrorism.

ISLAMABAD (Dunya News) – Foreign Minister Shah Mahmood Qureshi on Thursday while declaring the verdict into Samjhota Express bombing case discriminatory said that the decision is shocking as the main accused, Swami Aseemanand, had himself confessed to his crime.

Addressing a press conference in Islamabad on Thursday, he said that on one hand India is blaming Pakistan for Pulwama incident without any proof while on the other its court has acquitted all the four accused in Samjhauta Express train attack, in which 44 innocent Pakistanis were killed.

He asked the world community to take notice of India s double standard on the issue of terrorism.

The foreign minister said the post-Pulwama situation in the region has once again proved that China is a time-tested friend of Pakistan and it stands by Pakistan like a rock.

He said Pakistan has received dossier from India about the Pulwama incident and it will show to the world whatever its findings are.

Regarding Christchurch terrorist attack, the foreign minister said that Pakistan is saddened by the terrorist attack in which around 50 Muslims including nine Pakistanis had been martyred.

Qureshi lauded the behavior of New Zealand government, particularly Prime Minister Jacinda Arden, in the wake of attacks on mosques in Christchurch. He also appreciated the courage and bravery of the New Zealand national of Pakistani origin, Naeem Rashid, who tried to save fellow Muslims by laying down his life.

Criticizing India s reaction to the Christchurch attack the foreign minister said that it demonstrates New Delhi s double standards as it did not even mention the words Muslims or mosques while condemning the attack.

He said on one hand, India has such attitude towards the Muslims while on the other, it seeks representation in the OIC. He said it is due to these double standards that the world community is not giving any value to the Indian narrative.

“China will hold the Belt and Road Forum on April 25, which besides heads of state and government of thirty-six countires, will also be attended by Prime Minister Imran Khan,” he said and added Pakistan will have a key role in the conference because China Pakistan economic Corridor is a flagship project of the Belt and Road Initiative.

Shah Mahmood Qureshi said that it was for the first time that he held strategic dialogue with his Chinese counterpart Wang Yi during his recent visit to Beijing, with the objective to upgrade political consultations between the two countries.

He said he also briefed the Chinese leadership about the ongoing talks for restoration of peace and stability in Afghanistan.

About relations with the United States, the Foreign Minister said it is encouraging that President Donald Trump, Zalmay Khalilzad and other senior US officials are speaking of improvement in relations with Pakistan.

About the visit of Malaysian Prime Minister Mahathir Mohammad, Shah Mehmood Qureshi said the visiting dignitary is accompanied by a large delegation, including businessmen and other key senior officials. The visit will further boost the existing exemplary relations between Pakistan and Malaysia.