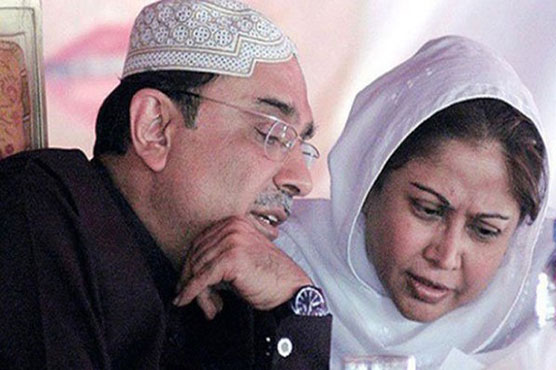 A two-member bench of the Sindh High Court (SHC) will hear the petitions tomorrow.

Sources familiar with the matter informed the media that a two-member bench of the SHC will hear the petitions tomorrow.
Seeking annulment of the banking court’s decision, Zardari and Talpur have termed the move in petitions “illegal”.

Last month, the NAB had filed a petition with the trial court on behalf of NAB Chairman Justice (r) Javed Iqbal, stating that the investigation of the case had been transferred to the anti-graft watchdog by the apex court. The petition had requested the trial court to transfer the proceedings of the case to an accountability court in Rawalpindi.

Following the petition, the banking court had reserved its verdict earlier this week. On Friday, the court announced its verdict and allowed the transfer of the fake accounts and money laundering case from Karachi to an accountability court in Rawalpindi.

Importantly, the banking court had cancelled the interim bails granted to Zardari, Talpur and others as the case had been transferred to a different court.

At the banking court, Zardari’s counsel, Farooq H. Naek, had argued that there were "no grounds" for transferring the case to Rawalpindi and pointed out that the top court had ordered that NAB conclude its investigation within two months, which he said had already lapsed. He further said that it was "important to review" Section 16-A (transfer of cases) of the National Accountability Ordinance, 1999.