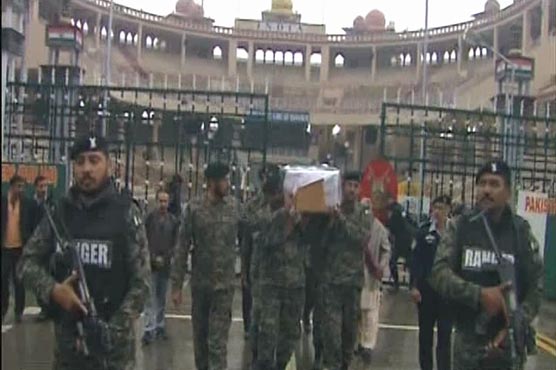 Shakirullah was in Indian jail since 2001.

LAHORE (Dunya News) – The Government of India on Saturday handed over the dead body of Shakirullah at Wagha Border.

The family members of the deceased received the body.

Shakirullah was killed by inmates in Jaipur Jail, India.

The Government of Pakistan condemned the incident and requested India to immediately provide the details of inquiry of the murder and post-mortem report, which have not been provided so far.

Pakistan reiterates its demand that the culprits must be taken to task, findings of the inquiry and post mortem report may be shared urgently and to ensure safety of all Pakistanis, especially Pakistani prisoners in Indian jails to prevent recurrence of such tragic and reprehensible incidents.

Shakirullah was in Indian jail since 2001. However, he was murdered on February 20 after India leveled false allegations against Pakistan of being involved in the Pulwama attack.