Government committed to implement NAP in letter and spirit: Fawad 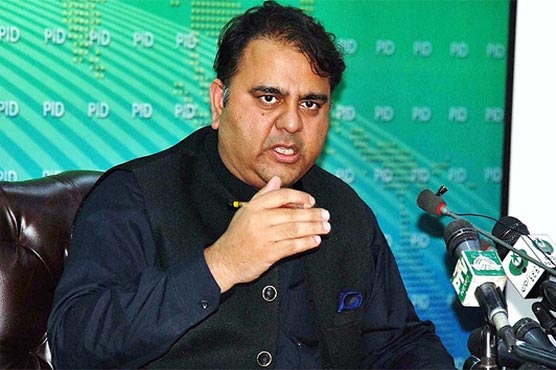 Fawad told that India is leveling baseless allegation regarding a Madrassa in Bahawalpur.

In a statement, he said the National Security Committee (NSC) has taken a decision in this regard and the Plan is being implemented with consent of all political parties.

The Information Minister told that India is leveling baseless allegation regarding a Madrassa in Bahawalpur by terming it as headquarters of Jaesh-e-Mohammad which has no reality.

He confirmed that Punjab government has taken over the administrative charge of the Madrassa and would take a delegation of journalists to it so they can analyze the facts themselves.

Fawad Chaudhry notified that more than 700 students are studying at the Madrassa and it has nothing to do with the activities in Occupied Kashmir.

“A Spokesman of the Ministry of Interior has said that the government of Punjab has taken over the control of a campus comprising Madressatul Sabir and Jama-e-Masjid Subhanallah in Bahawalpur, reportedly the Headquarters of Jaesh-e-Mohammad and appointed an administrator to manage its affairs,” says Press Information Department (PID).

The Spokesman said that the action was taken in line with the decision of the National Security Committee meeting held yesterday under the chairmanship of Prime Minister Imran Khan.

He maintained that the campus has a faculty of 70 teachers and currently 600 students were studying in it.

The Punjab police is providing security and protection to the campus, he added.

The government on Thursday also gave approval to ban two groups during the NSC meeting.

Jamaat-ud-Dawa and Falah-e-Insaniat Foundation were designated "proscribed organisations", the interior ministry said in a statement, adding that Prime Minister Imran Khan had ordered officials to accelerate action against banned groups.

The meetings of Financial Action Task Force (FATF) at OECD, Paris reviewed the compliance of a number of countries with the international standards on Anti-Money Laundering and Counter Financing of Terrorism (AML-CFT).

Pakistan was earlier placed by FATF in its Ongoing Compliance Document in view of an Action Plan undertaken by it to strengthen its CFT Regime.

The FATF reviewed the progress made by Pakistani authorities concerned with CFT role, based upon an analysis carried out by Asia-Pacific Joint Group.

The FATF noted that Pakistan took several steps to implement the Action Plan including by undertaking Risk Assessment of Terrorism Financing and Cash Smuggling in the country.

FATF advised Pakistan to take further actions that include detailed assessment of TF Risk, strengthening of AML/CFT supervisory measures by the regulatory authorities, financial inquiries and investigations into terrorist funding activities and promotion of awareness among the citizens on CFT measures and controls.