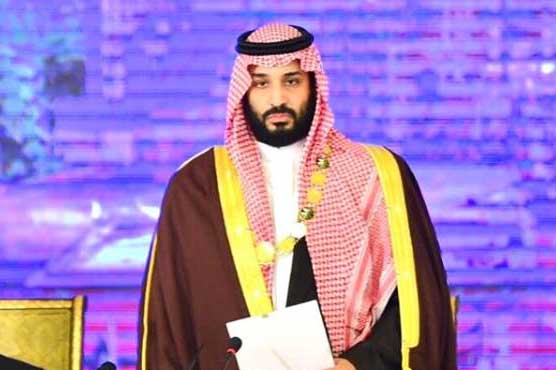 Addressing a joint press conference along with the prime minister at the Nur Khan airbase on Monday, he said that Pakistan is making progress in the leadership of Imran Khan, adding that we see Pakistan as a big economy in his leadership.

The crown prince went on to say that Saudi Arabia believes in the future of Pakistan and it will continue to do more for the development and progress of the country.

“Pakistan has the potential to become a big economy by 2030,” has said.

“As a sequel to Prime Minister of Pakistan request, His Royal Highness the Crown Prince of KSA Mohammad Bin Salman has ordered the immediate release of 2107 Pakistani prisoners Saudi Jails,” he wrote.

The crown prince, widely known as "MBS", was given a warm welcome in Pakistan, including a 21-gun salute and an honour guard on Saturday.

F-16 and JF-17 Thunder jets of Pakistan Airforce took the plane of visiting dignitary into protective custody when it entered into Pakistan’s airspace and escorted it to its destination.

Saudi Prince Mohammad bin Salman reached Prime Minister House, where he was presented a guard of honour. The Saudi Crown Prince was driven to the PM House by Prime Minister Imran Khan himself.

Saudi Arabia and Pakistan signed a raft of investment deals Sunday worth up to $20 billion during the first-ever visit of Saudi Crown Prince Mohammad bin Salman to Pakistan.

The signing ceremony was held at the Prime Minister House in Islamabad. The sectors include cooperation in production of electricity, establishment of refinery petrochemical plant, promotion of sports and technical assistance in standardization sector.

PM Imran said Pakistan is ready to play its role in mediating between Saudi Arabia, Yemen and Iran. He emphasized that peace in Afghanistan will bring stability and prosperity in the region.

Imran Khan said Pakistan was known as a peaceful country before Afghan conflict. He added that Crown Prince Mohammad bin Salman is a reformer and he is taking steps to turn his country into a modern and forward looking nation.

“The visit of the crown prince is a manifestation of the strength of this relationship. First, crown prince’s visit will strengthen the diplomatic support of Saudi Arabia to Pakistan and will reinforce our relations. Second, I am confident that the economic relations of the two countries will be further expanded by identifying new avenues of investment and as well as Joint Ventures between the two countries. Third, it would further our mutual trust and strong historical relations,” the PM said in an interview.

Pakistan will confer its highest civilian honour on the Saudi crown prince on Monday, a day after he signed investment deals worth $20 billion on the first stop of an Asian tour.

President Arif Alvi will award Mohammad bin Salman the Nishan-e-Pakistan (Order of Pakistan), the foreign office said in a statement.