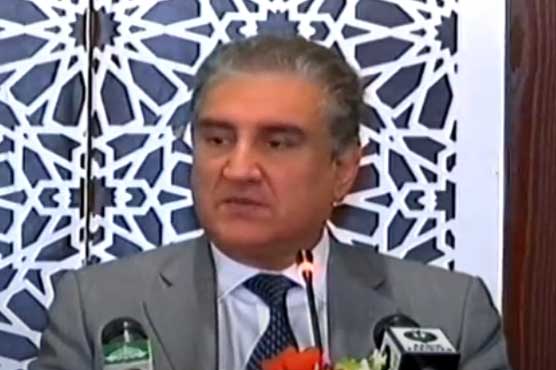 A Coordination Council will be set up to monitor the progress on signed agreements.

Addressing a press conference along with Federal Minister for Information and Broadcasting Fawad Chaudhry and Prime Minister s Advisor on Commerce Abdul Razak Dawood in Islamabad on Wednesday, he said that Saudi Arabia is our close and trustworthy friend and the relations with the visit of Crown Prince Muhammad Bin Salman will be improved further.

The minister said that Crown Prince Muhammad Bin Salman’s visit is the beginning of a new era, adding that at least eight MoUs are expected to be signed during his visit.

“A Coordination Council will be set up to monitor the progress on signed agreements,” he said.

Qureshi went on to say that the visits of Prime Minister Imran Khan to Saudi Arabia have improved relations between the two countries which declined in the tenure of previous government.

“Saudi leadership during the prime minister s visit to Riyadh desired to turn friendly relations in economic partnership,” he added.

The foreign minister said: “He is leaving for Germany tomorrow (Thursday) to attend Munich conference on Afghan issue. He said that he will hold meetings with Afghan President Ashraf Ghani and other world leaders to bring peace in Afghanistan.”

Prime Minister s Advisor on Commerce Abdul Razak Dawood hoped that more than 22 industrialists would also be accompanying the Saudi Crown Prince during his visit.

He further hoped that he economic relations between the two countries would strengthen after his visit.

The minister said that Riyadh also want to invest in food and agricultural sectors, while details regarding oil refinery cannot be made public. It will take 12 to 1 months to prepare feasibility report, he added.

Strict security arrangements have been finalized ahead of arrival of Saudi Arabia’s Crown Prince Mohammed bin Salman in Islamabad.

As per plan, mobile phone service will remain suspended in parts of Islamabad and Rawalpindi while more than 100 check points will be established on different routes.

During the stay of the Prince, training flights will be suspended whereas flying drones will also be prohibited.

Teams of security, media and doctors of Mohammed bin Salman have already reached Islamabad. Besides this, five trucks full of Saudi Crown Prince’s personal amenities also arrived in Islamabad that include his exercise equipment, furniture and other personal belongings.

Mohammed bin Salman will likely stay at the Prime Minister House, however; two of the top hotels in Islamabad have been booked fully for members of his staff while two others have been partially booked.

Mohammed bin Salman’s visit to Pakistan is likely to bring $20 billion investment in the country.

According to sources, deals with Saudi Arabia have been finalized to get oil on loan. Saudi Arabia will provide oil worth $3 billion to Pakistan for three years. Furthermore, meetings will be held with Mohammed bin Salman to hand over two power plants based on Liquefied Natural Gas (LNG) to Saudi Arabia, with an expected investment of $2 billion. Saudi Arabia is also interested to invest $6 billion in Gwadar oil refinery.

The refinery and oil complex in the strategic Gwadar Port on the Arabian Sea is the ultimate destination for the massive multi-billion dollar China Pakistan Economic Corridor, which lies not far from the Indo-Iranian port of Chabahar.