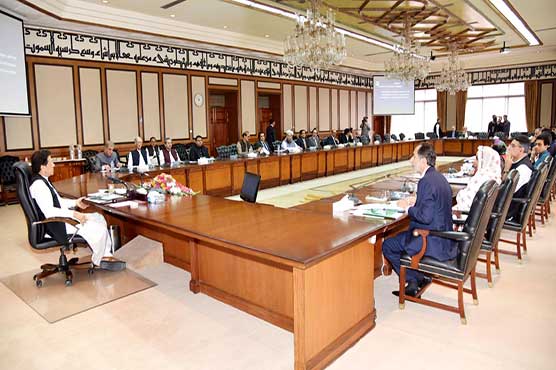 The decision had been awaiting detailed judgement from the Supreme Court.

ISLAMABAD (Dunya News) - Prime Minister (PM) Imran Khan is presiding over a meeting of the federal cabinet in Islamabad to review a 17-point agenda.

Initially, the agenda did not include the matter of placement of names of 172 ‘influential’ people on the Exit Control List (ECL).

The cabinet had ended the meeting with remarks that the final decision would be taken after a detailed judgement from the Supreme Court of Pakistan (SCP).

The detailed judgement has been released by the SCP.

Besides, the meeting is expected to ‘formulate’ appointment of Pakistan Telecommunication Authority’s (PTA) chairman, and approve supplementary grants for financial assistance of families of deceased civil servants.

The agenda also includes approval of expenses for legal experts who are expected to prosecute cases in Britain.

The cabinet meeting’s agenda also encompasses the cement industry’s supply and demand and costs and certain matters pertaining to the ministry of National Food Security & Research.

A grant for the power division is expected to be approved as a pension for families of deceased civil servants.

However, the Chief Justice of Pakistan Mian Saqib Nisar disapproved the recommendation and said that the head of the JIT had overstepped his mandate.