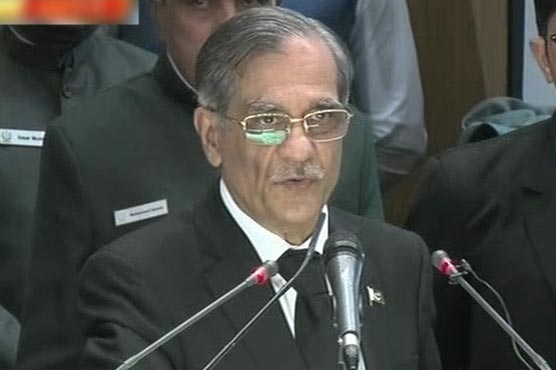 The CJP launched A Police Reforms committee Report at SC.

ISLAMABAD (Dunya News) - Chief Justice of Pakistan Mian Saqib Nisar on Monday stressed that he never exceeded limit in any of his action.

Addressing the ceremony, the Chief Justice maintained that his suo motu notice on DPO Pakpattan case faced criticism and objection.

He articulated that no one focused over police reforms before AD Khawaja case. Chief Justice emphasized on further improvement in the criminal justice system.

Speaking about the report, he said that it provides a roadmap to overhaul the police department keeping in view the modern challenges.

He accentuated for implementation of the report in letter and spirit to bring about a visible change in the functioning of the department. The Chief Justice declared that depoliticizing police and making it people friendly are at the core of the recommendations.

A strong police force is a pre requisite for providing a transparent and efficient justice system in any country, he added.

The Chief Justice affirmed that rule of law is imperative for peace and prosperity of the society. He stressed that police has an important role to play in maintaining law and order, and ensuring rule of law in the country.

Therefore, it is important that the force must be made fully independent and strong, he suggested.