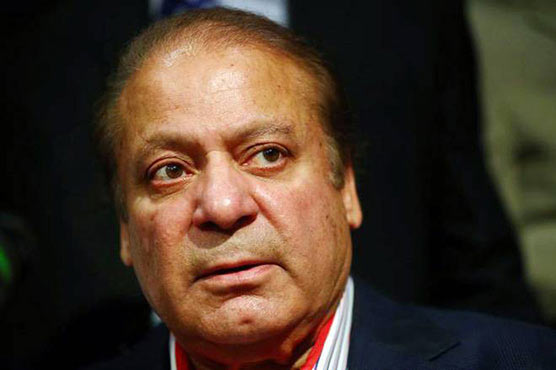 ISLAMABAD (Dunya News) – The Islamabad High Court (IHC) on Thursday has fixed January 21 the date of hearing of an appeal filed by former premier Nawaz Sharif seeking bail and suspension of his sentence in the Al-Azizia reference case.

Reportedly, a two-member bench of the court will preside over the hearing.

Yesterday, the IHC ordered its registrar office to fix the hearing within 10 days when Sharif’s legal team pleaded with the court for an early date for the writ petition to be heard.

The plea also stated that "transparent trial is the right of every Pakistani national.”

Earlier, Nawaz Sharif had asked the court to suspend his sentence and release him on bail in Al-Azizia reference case till the high court decides on his plea against the verdict.

However, the court remarked that the writ petition filed by Nawaz Sharif requesting bail in the Al-Azizia Steel Mills case, would be heard along with his first appeal challenging the court verdict in the case.

In the appeal, he has claimed that the accountability court’s judgement was based on ‘misunderstanding’ and ‘misinterpretation of the law’, and the evidences were addressed inappropriately.

The application further remarked that the grievances of the accused were not heard and addressed. Furthermore, he has requested the court for a bail until the application of suspension is not heard.

Contrarily, the NAB has also filed two appeals in the IHC, the first has sought an extension in Sharif’s sentence from seven to 14 years, and the other has challenged his acquittal in the Flagship Investment reference.

In the 131-page judgement written by the accountability court judge Arshad Malik, reasons of his conviction were mentioned. It said that the prosecution has successfully established all the ingredients of the offence of corruption committed by former prime minister Nawaz Sharif, and that he has failed to provide legal money trail of his assets.

Later, Sharif was arrested from the premises of the accountability court.

After spending a night at the Adiyala Jail in Rawalpindi, he was shifted to the Kot Lakhpat Jail in Lahore.

Earlier, the NAB had filed three cases -- Avenfield, Al-Azizia Steel Mills and Hill Metal Establishment, and offshore companies, including Flagship Investment Limited -- against the Sharifs on the Supreme Court’s directives in the July 2017 Panamagate verdict. The trial commenced later in September that year.

The three-time Premier and his sons Hasan and Hussain were accused in all the three graft references whereas his daughter Maryam Nawaz and son-in-law Muhammad Safdar were accused in the Avenfield reference only.

On July 6 in 2018, the accountability court had convicted him, his daughter Maryam Nawaz and son-in law Safdar in the Avenfield reference and sentenced them to 10 years, seven years and one year in prison, respectively.

Sharif and his daughter were arrested on July 13 upon returning from London.

However on September 19, an IHC division bench comprising of Chief Justice Minallah and Justice Miangul Hassan Aurangzeb suspended his sentence.

Later, the NAB filed an appeal against the suspension of sentence, which is pending adjudication before the Supreme Court.