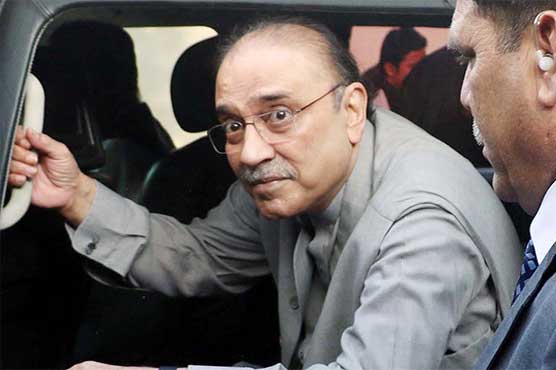 ISLAMABAD (Dunya News) - The Supreme Court on Monday issued notices to former president Asif Ali Zardari to submit a reply by December 31 in the fake bank accounts case following submission of a report by a Joint Investigation Team (JIT) pertaining to money laundering of billions of rupees during the hearing at the apex’s court’s registry in Lahore.

As the hearing proceeded, the court ordered to show the report compiled by the Joint Investigation Team (JIT) on a projector.

The report mentioned that the expenses of construction of Bilawal House in Karachi and Lahore were paid through fake bank accounts and the houses are owned by the Zardari Group.

Furthermore, Justice Ijaz ul Ahsan asked that if the properties were gifted then how it could be purchased while adding “was the gift not accepted?”

The JIT’s head told the court that the Zardari Group had acquired loans worth Rs53.4 billion out of which Rs24 billion was taken from the Sindh bank, and the Omni Group took loans from all five of its subsidiaries.

Besides, the court was also informed that the Omni Group had further incurred personnel expenses of the Zardari Group. The Chief Justice also lambasted model Ayan Ali and asked about her whereabouts.

“Did she move abroad due to illness?” he questioned while further asking about the procedure of bringing her back to Pakistan.

What further irked the apex court’s bench was noncooperation of Omni Group’s head Anwar Majeed with the JIT during investigation into the corruption charges.

“It seems that the arrogance of Omni Group’s owners has not diminished. They have looted nation’s billions of rupees and are still misbehaving. It appears that they are needed to be shifted from the Adiala Jail to elsewhere,” Justice Nisar remarked while adding that he would not spare ‘looters’and corrupt elements.

The case was adjourned till December 31.