Those who fail to deliver will not remain ministers, declares PM Khan 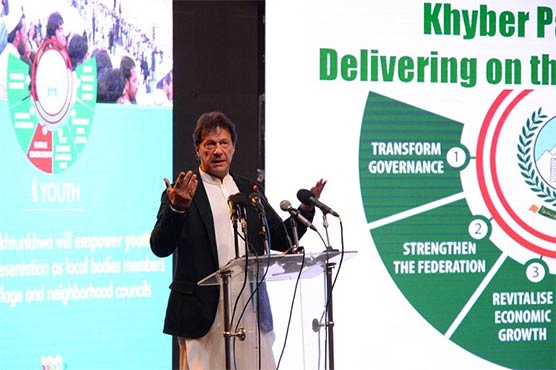 Those who fail to deliver will not remain ministers, declares PM Khan

We are not afraid of forward block formation in KP, he added.

PESHAWAR (Dunya News) - Prime Minister Imran Khan on Friday reiterated that the person who fails to deliver will not remain minister.

Speaking at a ceremony held in connection with the completion of the Khyber Pakhtunkhwa government’s 100 days in office, he thanked the people for providing them with their mandate.

“We were the first party to be voted in to government again in KPK. And that was due to our performance,” he asserted.

“It is our misfortune that even after Independence from British, our rulers adopted the same culture and maintained high walls of Governor houses and other buildings. We’re demolishing those walls and opening such places for public. It’s their place to claim,” said PM Khan.

We are not afraid of forward block formation in KP, he added.

The premier shared his experience with a youngster who approached him regarding shelter home and offered to donate meals for all the people.

“I asked him how he’ll be able to do it. He told me he would feed people on his own first; others observed it and started donating him money. With that he was able to feed more people and that’s how he set up an NGO named Tars. So this is the empathy we need,” told PM Khan.

Referring to those who called him Taliban Khan, he declared, “Pakistan arranged talks between US and Afghan Taliban. Those who gave me the title of ‘Taliban Khan’ should know that the US raising the slogan of ‘do more’ is now seeking our help.”

US request for Pakistan’s cooperation for peace process in Afghanistan vindicates his stance regarding resolution of the Afghan conflict through dialogue, he added.

PM Khan stressed that there is no military solution to the Afghan issue and it should be resolved on the dialogue table.

He maintained that the elections were held free and fair while reiterating his stance of reopening any constituency. PM Khan also directed the ministers to daily visit their office.

Prime Minister Imran Khan told that the government is focused to improve education, health and investment sectors to uplift standard of the common man.

The Prime Minister said steps are being taken to introduce a uniform curriculum across the country and improve condition of government hospitals for ensuring better basic facilities to people.

He declared that the decision of setting up shelters for homeless people in various cities indicates the PTI’s mindset of helping the poor.

Underlining the importance of investment for economic development, the Prime Minister said the government will ensure ease of doing business. He pronounced that a large number of local and foreign investors want to invest in Pakistan, and several major international companies, including the world largest oil and gas exploration company ExxonMobil, have expressed keenness for it. He also advised the KP government to remove bottlenecks for investment.

The premier said the KP government should ensure implementation of the law related to decision of civil cases within one year.

Regarding local government system in Khyber Pakhtunkhwa, Imran Khan said Village Councils will be further strengthened and Tehsil Nazims will be directly elected enabling them to serve independently.

The Prime Minister expressed confidence that Peshawar will become a hub of economic activity and tourism after implementation of the projects being executed under China-Pakistan Economic Corridor. He said Bala Hissar Fort will be made center of tourism in Peshawar, and it will be opened for public.

The old Peshawar city will be developed to preserve ancient culture as the city represents two thousand years old civilization, he maintained.

On erstwhile FATA’s merger with Khyber Pakhtunkhwa, Imran Khan said it is a difficult task and the government is working to complete the process.

“A roadmap is being prepared for development of the tribal areas. Insaf Health Cards will be given to people in the tribal areas to provide them better healthcare,” announced the PM.

He urged the KP government to establish parks and playgrounds in the province including erstwhile FATA to promote positive activities among the youth.