Members have rejected decision to expel me from MQM-P: Sattar 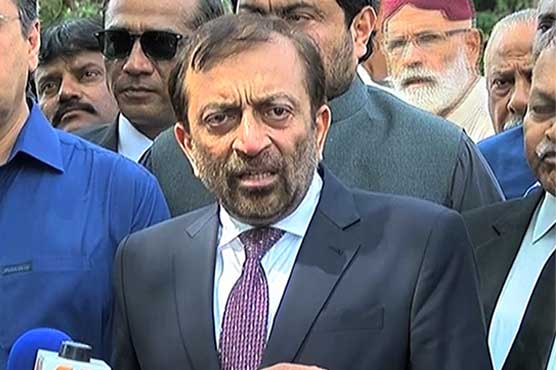 Members have rejected decision to expel me from MQM-P: Sattar

Sattar revealed that Rabitta Committee is under the pressure of some people.

KARACHI (Dunya News) – Disgruntled Muttahida Qaumi Movement-Pakistan (MQM-P) leader Dr Farooq Sattar on Saturday has said that members of the party have rejected the decision to revoke him.

Talking to media, Sattar revealed that Rabitta Committee is under the pressure of some people. It is now required to decide who will run the party, he added.

Farooq Sattar further said that he has never bashed anyone.

On the other hand, MQM-P’s Khawaja Izharul Hasan clarified that no member will get the authority as party founder as everyone in the party is only a member.

Party’s rules and regulations were known to all the workers and someone violating them could not stay, he added.

The reactions came after MQM-P decided to revoke the party membership of senior leader Dr Farooq Sattar during a meeting at the secretariat in Bahadurabad. The leadership had also directed the members not to maintain any contact with him.

It is to be mentioned here that Sattar had stepped back from the party matters after he was not given ticket for the by-elections. He had also resigned from the Rabita Committee due to personal reasons.

MQM-P was divided into two groups, PIB and Bahadurabad wings, following a dispute over the party’s nominations for Senate election.

Afterwards, Election Commission of Pakistan (ECP) sacked Farooq Sattar from the post of party convenership and annulled the intra-party elections of PIB wing.

On August 22, 2016, Sattar had taken over as MQM-Pakistan’s chief and disconnected contacts with the London faction.