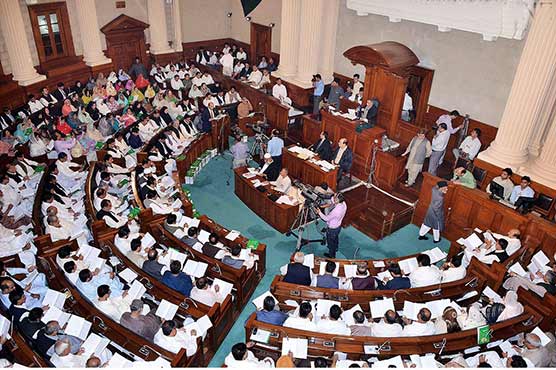 PML-N has decided to boycott PA's proceedings until withdrawal of ban on the six members.

In the video, it can be seen that there was no damage to furniture whereas lawmakers were roaming comfortably.

On the other hand, an investigation committee has been constituted to probe the hapless incident inside Punjab Assembly which drew sharp criticism from people from all walks of life. The committee will complete probe into the matter within 14 days.

Earlier, the provincial govt had also released a video in which House could be seen in abysmal condition. The Buzdar-led gov had accused members of the opposition including Pakistan Muslim League Nawaz (PML-N) of destroying the future. The speaker had also suspended six MPAs of PML-N in this regard.

On the other hand, PML-N has decided to boycott Punjab Assembly proceedings until withdrawal of ban on the six members.

The assembly session faced a delay as the opposition parties led by PML-N staged protest, demanding removal of ban on six MPAs.
Wearing black armbands, the protesters chanted slogans against the provincial government.

Meanwhile, Punjab Assembly Speaker Chaudhry Pervez Elahi said that the PML-N leaders will have to pay for sabotaging the budget session.