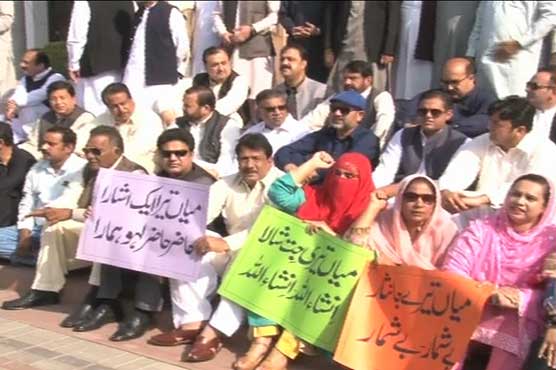 The protesters chanted slogans against the provincial government.

LAHORE (Dunya News) – The lawmakers of Pakistan Muslim League-Nawaz (PML-N) on Tuesday has decided to boycott Punjab Assembly proceedings until withdrawal of ban on the six members.

The assembly session faced a delay as the opposition parties led by PML-N staged protest, demanding removal of ban on six MPAs.

Meanwhile, Punjab Assembly Speaker Chaudhry Pervez Elahi said that the PML-N leaders will have to pay for sabotaging the budget session.

Earlier on October 16, Punjab government unveiled its 2026.51 billion rupees budget for the fiscal year 2018-19 amid ruckus in the assembly by opposition members on the arrest of Pakistan Muslim League-Nawaz (PML-N) president and Opposition Leader in National Assembly Shehbaz Sharif.

The agitated protesters also destroyed mic, chairs and podium in the assembly.