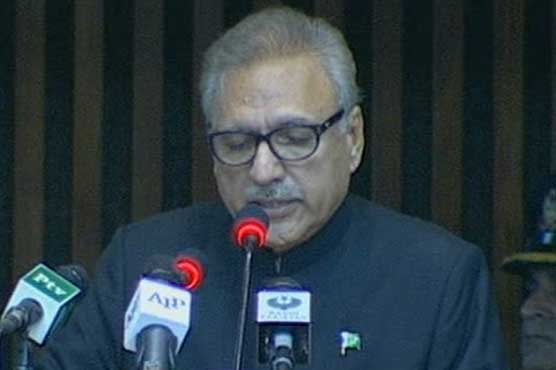 Alvi said construction of water reservoirs was the topmost priority of the incumbent government.

Addressing a two-day international symposium on “Creating a Water Secure Pakistan” in Islamabad, Arif Alvi said construction of water reservoirs was the topmost priority of the incumbent government.

“Nature has been very kind to us providing all sorts of natural resources, including water but over the years increasing population and lack of building more water reservoirs led to strong pressure on existing resources of water,” he added.

The president said two million drought-stricken residents of Cholistan amplify the magnitude of water crisis in Pakistan, adding that Tharparkar was such a case where adequate water measures were not adopted for the growing needs of people.

He appreciated the initiative of Chief Justice of Pakistan Justice Saqib Nisar for raising the issue of water shortage and establishing a fund for this purpose.

In his remarks, the chief justice said judiciary could not remain oblivious to the country’s water woes. “We took this issue and passed judgment,” he added.

He said the dam fund was created while keeping in mind that country has not much capital to construct large dams. There was an overwhelming response from the public and even children and pensioners made contributions in this fund, he added.

“Water is life and arduous efforts are needed to save the country from becoming water scarce. Humans can live without food for days but cannot survive without water,” he said.